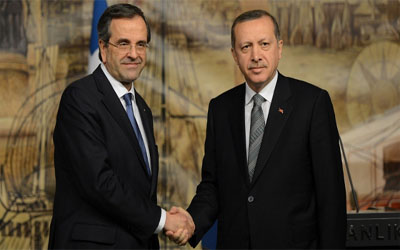 The Istanbul 2020 bid has received a boost following Greece’s pledge to fully support the bid to bring the Olympics and Paralympics to Turkey.

A joint statement from the two Prime Ministers’ offices said both countries would: “engage in cooperation with regard to the technical and related aspects in the organisation of the 2020 Summer Olympic Games” and “explore ways of enhancing the benefits of the Olympics for the two countries.

Hasan Arat, Chairman of the IStanbul 2020 Bid Committee, said: “The ties between Turkey and Greece have been strengthened today, thanks to the power of the Olympic Movement to build bridges. The closer cooperation between our countries will be a valuable and lasting legacy of our bid.”

IOC member and President of the Turkish NOC, Ugur Erdener, added: “This is a very symbolic agreement for Turkey as we look to bring the Olympic and Paralympic Games to our country for the very first time. Greece is the spiritual home of the Olympic Movement and I hope this connection will continue to grow the huge passion for hosting the Games.

“94% of the people of Istanbul are behind Istanbul 2020. We have had very close relations with Greece on sport for many years. I believe that this agreement will create even more opportunities.”