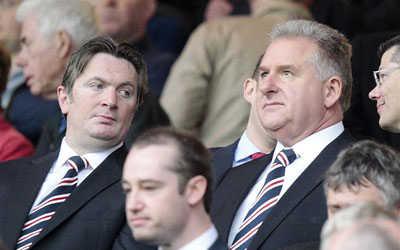 The League One champions confirmed Wallace’s departure in a 7am statement to the Stock Exchange on Monday.

In a separate statement made to the AIM – a sub-market of the London Stock Exchange – the club also announced it had accepted Ashley’s £2m loan offer, required to meet urgent working capital needs.

The statement said: “Rangers announces that Graham Wallace (pictured right), Chief Executive Officer, has resigned as a director and employee of the Company and its subsidiaries with immediate effect.

“The Directors would like to thank Graham for his contribution to the Club during a difficult period.

“The Board has commenced the search for a Chief Executive Officer. A further announcement will be made in due course.”

Wallace was brought in as chief executive last November by PLC chairman David Somers to lead the restructuring of the club.

He was criticised by the fans for failing to reveal the true state of the club’s fragile finances, and also found himself at odds with football board chairman Sandy Easdale – who controls a significant 26% stake through shares and proxies – as he tried to push through a £16m rescue package being offered by former director Dave King.