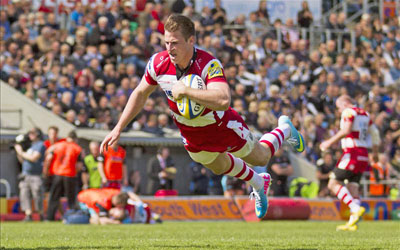 Gloucester Rugby Record Profits For 4th Year in a Row

The results were achieved whilst the team invested record levels in the coaching, playing and support staff, as well as developing the rugby environment at the Hartpury Training Centre and investing in a number of projects at their Kingsholm stadium.

CEO Stephen Vaughan said: “It has, of course, been a challenging 12 months. There has been a significant amount of movement in playing department personnel and that naturally can cause unrest. However under David Humphreys’ guidance, I believe we are putting in the right foundations to deliver success in the long term.

“From a business perspective, the economy has shown signs of improving but we have had to continue to work hard to remain competitive on and off the field.

“These results have been achieved despite what was a tough season on the field of play. For the club to increase turnover and profit reflects the hard work of everyone at the club, and is also thanks to the continued magnificent support of our sponsors and supporters who have been first class in every respect.

“Success on the pitch is what drives us and is why we are here. So it is crucial that we continue to compete financially with the richest clubs in England when it comes to the playing and support personnel, so we will be working even harder to ensure we can generate the revenues to do just that moving forward.

“We have a record number of quality sponsors, hospitality revenue was the highest it has been since the Mira Showers stand was built in 2007 and our loyal Club Members remain the bedrock of the club.

“With Rugby World Cup 2015 on the horizon, and Kingsholm hosting four matches, Rugby Union is on the verge of a very exciting time and we hope that Gloucester Rugby will continue to be at the very heart of it.”

“Once again, we’ve shown that you can compete at the highest level of club rugby and still deliver a profitable business. Despite finishing below where we would expect to last season, we have shown that a good business model and strong leadership, allied with great support from fans and sponsors allows us to sustain our solid footing as a truly self-sustainable club.

Co-owner Martin St Quinton added: “We’re committed to continuing this good work and, with David Humphreys and his coaches and players, we have a high quality group of people at the club.

“I believe that we are putting the building blocks in place that over time will put Gloucester Rugby back where we belong, challenging at the top end of the Aviva Premiership and giving our supporters a team to be proud of.”