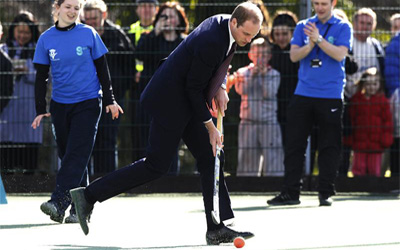 Glasgow’s bid to host the 2018 Youth Olympic Games has been boosted by the support of the Duke and Duchess of Cambridge, Prince William and his wife, Kate Middleton.

The Royal couple visited the Scottish city yesterday and launched a new sports coaching project for young people on behalf of the Royal Foundation of the Duke and Duchess of Cambridge and Prince Harry at the Donald Dewar centre.

They also met Mahad Ahmed and Jasmine Main, two ambassadors of the 2018 bid, and lauched Coach Core, which will be part of the city’s legacy from hosting the 2014 Commonwealth Games and potentially the 2018 Youth Olympic Games.

Prince William said: “Glasgow is a city with a great buzz and enormous optimism. The Commonwealth Games here next year will be brought to life by Glasgow’s youthful energy, creativity, and its unrivalled cultural heritage. Glasgow would also be tremendous host – if successful, as we hope you are – for the 2018 Youth Olympic Games, continuing the legacy from last year”.

Glasgow 2018 Bid Director Paul Bush added: “Our bid to bring the 2018 Youth Olympic Games in Glasgow has young people at its very heart so it was fitting the our Young Ambassadors were able to tell the Duke of Cambridge of our plans. We want to inspire young people to be champions in their lives and that inspiration was evident today as the sportsmen and women of the future showed Their Royal Highnesses what the world can expect from Glasgow in 2018”.