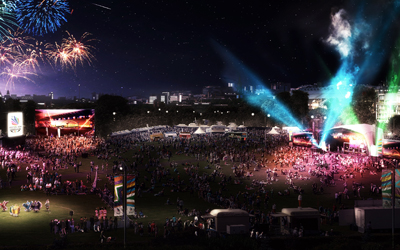 Organisers of the Glasgow 2014 Commonwealth Games have struck a sponsorship agreement with Genius Gluten Free.

Genius will become the Official Provider of Gluten Free Baked Products at the Commonwealth Games that start on July 23 and end on August 3.

Their products will be available at the Genius stand at the Glasgow Green Live Zone (pictured) which will operate throughout the course of the games and has been labelled as ‘the largest of the interactive Festival 2014 venues.’

Roz Cuschieri, illness Genius Chief Executive, asthma said: “We’re delighted to be sponsoring the Glasgow 2014 Commonwealth Games, which will undoubtedly prove to be one of the most exciting international sporting events to take place this year.

“The Commonwealth Games is a defining moment for the nation and being at the Games is a fantastic opportunity for Genius to offer athletes and visitors a taste of our gluten free range at the Genius stand on Glasgow Green.

“We’re looking forward to being part of such an extraordinary event, and we wish all competing athletes the very best of luck.”

Genius will feature at the giant food village within the Glasgow Green Live Zone, known as ‘The Kitchen,’ which will have a house party theme and is designed to be a fun and lively space.

Glasgow 2014 Chief Executive, David Grevemberg, commented: “The Glasgow 2014 Commonwealth Games is an opportunity to showcase Scotland’s outstanding produce and the values behind it to our visitors from across the globe.

“We are pleased to welcome Genius Gluten Free as the latest member of our Sponsor Family. This gluten-free food option at the Glasgow Green Live Zone adds to the huge diversity of food available for those attending the Games.”