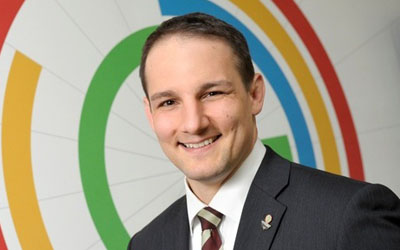 The Commonwealth Games Federation have announced today that David Grevemberg will be their new Chief Executive.

Currently the Chief Executive of the Glasgow 2014 Commonwealth Games, doctor he will take up his new role as head of one of the world’s leading sports organisations in November.

The appointment comes after a meeting yesterday (June 5) of the Federation’s Executive Board in Dubai.

Making the announcement, capsule CGF President, HRH Prince Imran, said: “I am absolutely delighted to have a sports leader of David’s calibre join us at this important time for the Commonwealth sports movement. He has an excellent track record for delivery and shows a real ambition for harnessing the power of sport within the Commonwealth. We look forward very much to the energy, vision and commitment he will bring to the Federation.”

David, 41, has been CEO of Glasgow 2014 since Sept 2011. He joined the OC as the Director of Operations in October 2009 and progressed to the role of Chief Operating Officer in July 2010. Previously he was the Executive Director of Sport and International Federation (IF) Relations at the International Paralympic Committee. He is a former wrestler and sports coach and was born in New Orleans, USA.

David Grevemberg said: “It will be an honour and privilege to lead the Commonwealth sports movement on the next stage of its journey. This is a time of tremendous opportunity for the Commonwealth in which sport has an impactful role to play in empowering, inspiring and connecting nations and people in shared purpose.

“Glasgow 2014 is setting a new benchmark for Commonwealth Games and gives the movement sound foundations from which to build and grow. My immediate focus is on ensuring that – together with our Games Partners – we do Glasgow and Scotland proud and deliver the best Games ever, creating a great global stage for Commonwealth athletes to shine and a wonderful festival of sport the Commonwealth can enjoy.

“I look forward to working with HRH Prince Imran, the Executive Board and the whole Commonwealth Games family – in particular Samoa and Gold Coast, hosts of the next Commonwealth Youth Games and Commonwealth Games. I’d also like to pay tribute to Mike Hooper for the commitment he has shown to Commonwealth sport over the past 14 years as the CGF’s Chief Executive.”