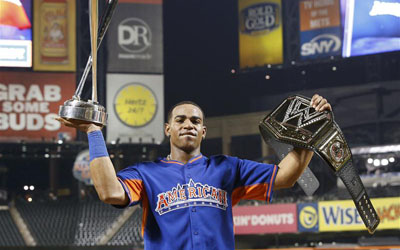 Personal care brand Gillette has expanded its partnership with Major League Baseball (MLB) by becoming the title sponsor of the 2014 Home Run Derby.

The event takes place on Monday, July 14, as part of All-Star Week at Target Field in Minnesota, and it will be televised live on ESPN starting at 8 p.m. ET and featuring live coverage by MLB Advanced Media, which coordinates the popular social-media interaction by players around the field.

The summer showcase event has grown in recent years through multiple innovations. In addition to the rise of social engagement by players, this also will mark the fourth consecutive year featuring captains for the AL and NL squads, who will select the other participants and personally invite them. The captains for this year’s event, as well as other details, will be announced in the coming weeks

“Gillette has partnered with Major League Baseball longer than any other company, and the Gillette Home Run Derby is a terrific way to celebrate our 75th anniversary of working together,” said Tim Brosnan, MLB executive vice president of business. “With outstanding performances, the successful introduction of players engaging in social media during the event and integration of captains from each league in previous years, the Derby continues to be fresh, entertaining and one of the most popular events on the sports calendar.”

“Whether you’re standing at the plate waiting to crush the ball or in front of the mirror prepping for an optimal shave, we understand that maximum contact is very important when performing your best,” said Hooman Shahidi, senior brand manager of Gillette North America. “That’s why we’re excited to partner with Major League Baseball during the Home Run Derby to promote our new Gillette Fusion ProGlide with FlexBall Technology, which features a new dimension of movement to better meet a man’s face, resulting in maximum contact and fewer missed hairs.”