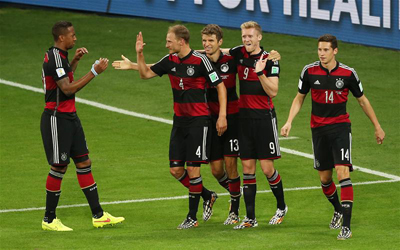 Brazil’s crushing 7-1 defeat at the hands of Germany in the semi-final of their own World Cup has broken records on social media website Twitter.

The match became the most discussed sports game ever in Twitter’s history, totalling 35.6m tweets – the previous best was the latest NFL Super Bowl which generated 24.9m tweets earlier in 2014.

Another record was broken when the magnificent Sami Khedira scored rampant Germany’s fifth goal, with the match peaking at 580,166 tweets per minute (TPM).

That figure surpassed popstar Miley Cyrus’ infamous performance at the MTV VMAs which peaked at 360,000 TPM – although that itself was beaten earlier in the 2014 World Cup when Brazil beat Chile on penalties (388,985 TPM).

German striker Miroslav Klose also moved into the record books in more ways than one, when he surpassed Ronaldo to become the highest scoring player in World Cup history.

On Twitter last night, he was the most mentioned player.

The statistics show the increased use of second screen during sporting events. The heat map from last night’s global Twitter activity can be found here.