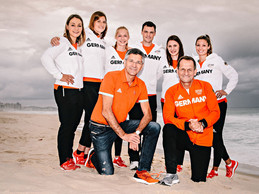 The partnership between the DOSB or the National Olympic Committee (NOC) of Germany and adidas has been around for more than 45 years.

At this year’s Olympic Games in Rio de Janeiro, adidas supplies more than 60,000 items for German athletes, including the podium and workout clothes, and for the first time also the official equipment for the opening ceremony.

An important part of the partnership between adidas and the DOSB is also working closely with numerous youth programs and events such as the “Youth Olympic Games” or the “Olympic Festival of European Youth”.

Herbert Hainer, adidas Group CEO, said: “The close and trusting cooperation with the German Olympic team is undoubtedly very special for us. We are pleased that we can support the best German athletes at the Olympic Games in the future. “

DOSB president Alfons Hörmann added: “The adidas brand is an integral part of the German Olympic team. We are very happy that this partnership will now continue until at least the 2024. Together we will write new chapter in Olympic history and inspire the younger generation to the sport”