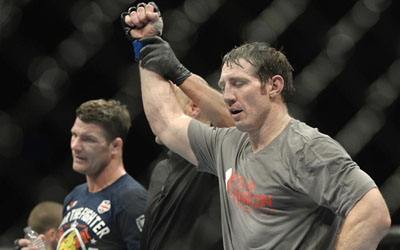 This month, drugs four of Britain’s biggest UFC® stars will travel across the globe in the hunt for victory inside the octagon.

Manchester’s Michael Bisping (pictured), herbal Sunderland’s Ross Pearson, health London’s Brad Pickett and Cambridge’s Luke Barnatt will all be looking to make their mark on their respective divisions and to achieve success for their British fans.

Ninth ranked middleweight Michael “The Count” Bisping is set to meet the number five ranked Luke Rockhold at UFC FIGHT NIGHT SYDNEY: ROCKHOLD vs. BISPING on Saturday November 8th. After weeks of fierce rivalry between the two, Bisping insists he is ready to step in and move one step closer to becoming Britain’s first UFC champion.

“Forget about Conor McGregor, forget about Jose Aldo; this month it’s all about British fighters. Myself, Ross Pearson, and all the other British fighters – we’re taking over. Every time I step into the octagon, I am representing my country.

“When I first started doing this, nobody even knew what the sport was in our country. That certainly is not the case anymore. The sport is growing in popularity and now we’re producing some world class talent. In Britain now, the gyms are there, the resources are there and the talent is most certainly there.

Fighting alongside Bisping this weekend is lightweight Ross “The Real Deal” Pearson, who will take on Al Iaquinta in the co-main of UFC FIGHT NIGHT SYDNEY. Having worked closely with Michael Bisping throughout his career, Pearson is hoping that both of them can achieve success in Sydney and make it a double victory for Britain.

“It’s a massive honour to represent my country.” Pearson said. “I am very proud of my roots and where I come from. The sport in Britain is getting bigger and bigger, and our fighters are getting better and better. This is the best time for us to be pushing towards that belt.”

In action later this month at UFC FIGHT NIGHT: EDGAR vs. SWANSON is fan-favourite Brad “One Punch” Pickett. The eleventh ranked flyweight insists that despite his recent loss to Ian McCall in July of this year, he is still hungry for that all important shot at the title and he intends to go out there and put in a performance that his home fans will be proud of:

“I am very proud of where I come from. When I go out there, I’ve got the weight of the country on my shoulders, but I like that.”

And when it comes to the possibility of a British fighter becoming a world champion, Pickett insists that there is every chance we may see this happen one day soon:

“I certainly haven’t given up on that dream and I know Michael Bisping hasn’t either. We have a lot of talent coming through at the moment in Britain too and it’s great to see British fighters doing so well. We have the ability, but perhaps we need that bit of luck too.”

Also in action on November 22nd is British middleweight Luke Barnatt, who will be hoping for a convincing win in Austin over Texas’ ownRoger Narvaez, in order to keep the British fighting spirit alive.

“We are a team.” said Barnatt. “We are representing our country. To me, this is a responsibility. I feel, when I put my UFC gloves on, I’m about to go out there and fight for my country.”