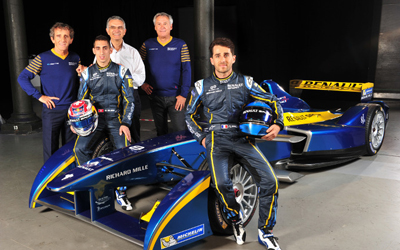 The announcement was made at the launch of Formula E in London last night, with the team also revealing their driver line-up – former F1 driver Sébastien Buemi and  four-time Formula One World Champion Alain Prost’s son, Nicolas.

Alain Prost, co-owner of e.dams-Renault and ambassador for the Renault brand, said: “Jean-Paul Driot (e.dams co-team founder) and I are delighted to be associated with Renault in this new adventure.

“The choice of Renault as a major partner was a natural step because of the exceptional record it has carved out in motorsport, as well as its unique expertise in the field of electric vehicles.

“Personally, I am thrilled by the idea of working with Renault on such an ambitious project again and by the prospect of writing a new chapter of our association.”

Renault have been associated with Renault since the start and are a Founding Technical Partner of the championship.

Patrice Ratti, President of Renault Sport, added: “This partnership with e.dams-Renault will allow Renault Sport to have an even closer involvement with the FIA Formula E Championship.

“The series will be unique and takes motorsport into a new age. Renault is proud to be playing a part in the adventure which stands out as a new challenge.

“We know Alain and Jean-Paul very well and their experience and record make them high-quality partners. Our involvement with e.dams-Renault will play a core role in our participation and in our Formula E development work.”

Commencing in September 2014, the championship will compete in the heart of 10 of the world’s leading cities – including London, Beijing and Buenos Aires – racing around their iconic landmarks