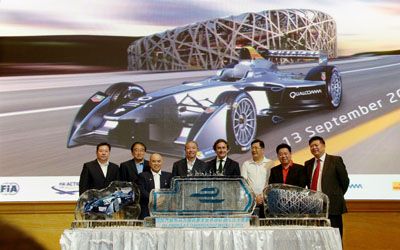 Formula E have signed a broadcast deal with CCTV-5, the main sports channel in the People’s Republic of China and part of the China Central Television network, at the launch event of the Beijing ePrix.

The deal will see the station televise all 10 Formula E races in full together with a regular highlights package and live coverage of the Beijing ePrix on September 13 2014.

China Central Television is the principal state broadcaster in mainland China with a network of 45 channels – the largest number of television sub-channels in the world – and has a potential reach of 200 million plus people. It joins previously announced broadcasters FOX Sports, covering the US and 88 territories around the world, Japan’s TV Asahi and ITV in the UK.

Formula E is the world’s first ever fully-electric race series using open-wheel cars capable of speeds in excess of 150mph. Its 10 teams have already been confirmed and feature some of the leading names in motorsport including a Chinese team led by Steven Lu.

Alejandro Agag said: “It’s a pleasure and an honour to be here in Beijing today and my thanks go to all the city and government authorities for their enthusiastic reception. On June 12 it will be exactly 100 days before Beijing hosts the opening ePrix and the world’s first all-electric Formula race.

“We’re also delighted to have signed the initial broadcast deal with CCTV-5 increasing our global reach and showcasing sustainable mobility to an even wider audience.”

Steven Lu, who also heads the organising team for the Beijing ePrix, added: “I am delighted to be welcoming everyone here today and to be presenting the Formula E car in Beijing for the first ever time. Preparations for the race event on September 13 are going very well and we are fully supported by the Beijing Government, the Ministry of Sports, the Sports Bureau and the ChaoYang District.”