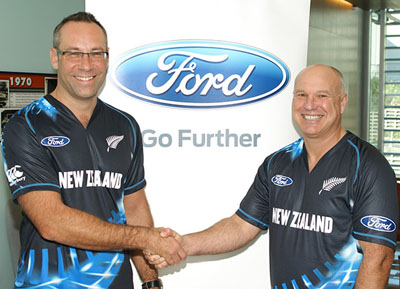 US car manufacturer Ford has extended its partnership of New Zealand Cricket by sponsoring the Blackcaps.

As part of the deal, the Ford logo will feature prominently on the Blackcaps playing shirts for all matches in New Zealand and abroad.

In addition, Ford’s increased sponsorship under the new agreement will also be acknowledged on the playing uniforms of the White Ferns, NZA and NZ Under-19 teams.

The increased sponsorship continues a trend that has seen the global car manufacturer’s support for cricket in New Zealand deepen at all levels. Ford has been the Official Vehicle Supplier to NZC since 2009 and, since 2011, also the naming rights sponsor of the Ford Trophy, the country’s premier domestic one-day competition.

Chris Masterson, Marketing Director of Ford NZ, said Ford enjoys being part of the cricket community in New Zealand. “We recognise the widespread passion for the game in New Zealand and the dedication of people at all levels to keep the sport robust and thriving.

“Ford is proud to be the driving force behind New Zealand sport. In addition to the BLACKCAPS and New Zealand Cricket, we are also long standing partners, 20 years in fact, of the All Blacks and New Zealand Rugby. We are proud sponsors of Hockey New Zealand, and we’re also involved in motorsport, supporting John McIntyre in the V8 Super Tourers.

NZC Chief Executive David White said “Ford’s consistent and deepening support helps to create opportunities for cricketers at all levels. With Ford now as team sponsor, we’re looking forward to the BLACKCAPS continuing their great start to the year as they commence the first Test against the West Indies this Sunday in Kingston, Jamaica.”