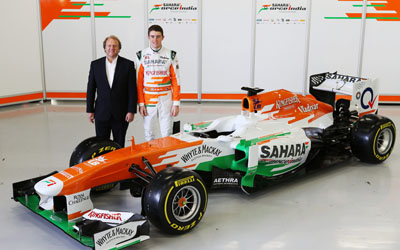 Force India team principal Bob Fernley has stressed that the financial problems co-owner Vijay Mallya is facing will have no bearing on the team.

Mallya’s Kingfisher Airlines owes 17 banks around £840m in unpaid debts and it is reported that the company is on the verge of collapse.

His stake in Force India has been mentioned as one of the assets the banks are looking to sell as collateral.

However Fernley has denied this. Speaking to jamesallenonf1.com, Fernley said: “There is a disconnect between what happens in Vijay’s business and what Vijay is doing on the F1 team.

“So it doesn’t matter what happens there. The shares in United Spirits have quadrupled in the last few months, so he did a wonderful deal there.

“But whether Kingfisher or United Spirits is doing well or not doesn’t affect the team, and it’s very difficult for us to get that message across, although we have been trying for several years.

“We get a story every three or four months where we are about to go bankrupt, or someone is selling us or whatever, and we’ve had that for five years, so we are used to it.

“Five times a year we are up for sale. But we are still there and the strength of Force India, which so many people seem to have missed, is our shareholders.

“We don’t have to go to the external market to be able to raise our race budgets. We are blessed to have quality shareholders like Vijay and Sahara.”

Subrata Roy Sahara, who purchased 42.5% stake in Force India 16 months ago is also battling financial problems, after having bank accounts for two of his companies frozen due to unpaid refunds to investors that amounts into the millions.