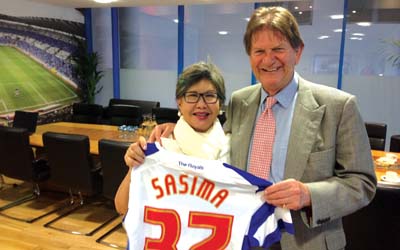 A consortium from Thailand have been given the green light by the Football League to purchase Reading Football Club, it has been revealed today.

The club’s chairman, Sir John Madejski, has been trying to sell the club for around a year and negotiations with the Thai consortium have been going on for some months.

Madejski became club chairman in 1990 and he largely funded the building of the stadium that bears his name in 1998.

He confirmed in a statement: “I delighted to announce that, following confirmation from the Football League, our new Asian consortium partners are now in place at Reading Football Club.

“After months of tireless hard work and a lot of speculation, I am very pleased to say that Reading Football Club’s future has been resolved.

“Over the past year, since the Zingarevich family left, we have engaged with a number of different prospective investors, but we have now succeeded in finding who I believe are the right people to take this club forward.

“I am honoured to be staying on as Co-Chairman at the club I love, with Khunying Sasima Srivikorn as my fellow Co-Chairwoman. Khunying Sasima has purchased 25% of the club, Khun Narin Niruttinanon has 50% and Khun Sumrith Thanakarnjanasuth the remaining 25%.

“They will all join the Reading Football Club board, as will Khun Jack Srisumrid and Khun Theekharoj Piamphongsarn. Nigel Howe will remain as Chief Executive and Ian Wood-Smith as non-executive Director.

“I cannot speak highly enough of our new partners from the time we have spent together so far. They have shown great professionalism, perseverance, patience and diligence and, on a personal level, our relationship is excellent and long may that continue.

“I have owned this great club for almost a quarter of a century and it has given me some of the greatest memories of my life. I am incredibly proud of the success we have enjoyed both on and off the pitch, reaching the Premier League on two occasions, relocating the club to the magnificent Madejski Stadium, almost qualifying for Europe, twice playing at Wembley Stadium, winning Football League Family Club of the Year – there are so many moments that will stick with me forever and it will give me great pride to continue to represent the club as Co-Chairman in the future.

“As we look forward together to a healthy future, I would like to express my sincere thanks to all the staff at Reading Football Club who have patiently supported the club throughout this process and given their total dedication, hard work and loyalty during these very difficult months. I would also like to offer my gratitude to our manager Nigel Adkins, the coaching staff and his squad of players for their unwavering positivity.

“It is important to also thank the media for their patience. I was not prepared to comment in depth until we had successfully completed the full process with the relevant authorities in its entirety.

“Last, but by no means least, I would like to personally thank every one of our loyal supporters for their unstinting dedication and understanding during the long time it has taken us to resolve this situation at the club.

“We have started this season well, which is testament to all of our staff and players here. There are reasons to be optimistic on many fronts, and we now move forward with a renewed vigour and high hopes for a bright new future.”