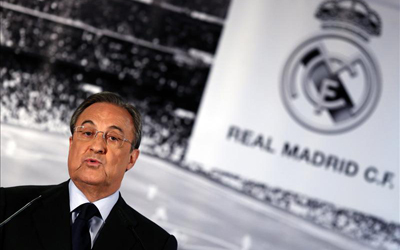 Florentino Perez will remain as the president of Real Madrid after the club officially announced his appointment along with the new Board of Directors on Tuesday.

No other candidates put themselves forward for the role and Perez, ask 66, was inaugurated at a ceremony in the Directors’ Box at the Santiago Bernabeu Stadium.

In his inaugural speech, the returning President said: “We begin a new chapter with the immense responsibility of leading the greatest football club in history.

“I can only have words of gratitude for the members of Real Madrid because their support is fundamental.

“In the last four years we have made great progress and taken a quantum leap. But the future is already here and I want more, as I am sure you do.

“We will strive our utmost to reach new heights.”

Perez has had two spells as president of Real Madrid and was at the helm during the infamous ‘Galactico’ era, where the club signed high profile footballers such as David Beckham and Zinedine Zidane.

Perez will now serve until 2017 and his first line of business will be to replace Chelsea-bound manager Jose Mourinho.

Paris Saint-Germain boss Carlo Ancelotti is the favourite to take over at the Santiago Bernabeu.

Real Madrid had earlier announced that Perez was running unopposed and a message on the club’s website on Sunday read: “There has not been more than one candidate declared for this Committee and by virtue of Article 40, part E, point two of the reigning statutes for members of the club, Florentino Perez is proclaimed president along with his Board of Directors.”