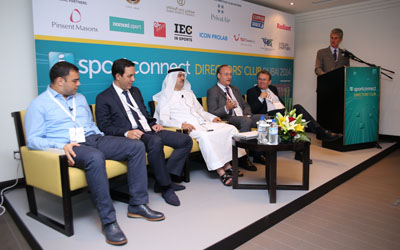 iSportconnect, in partnership with INTERACT and supported by Dubai Sports Council, brought together key stakeholders in the world of sport to discuss the crucial issues in sport business in the region. There was enthusiastic debate, in a closed door environment.

The Directors Club event kicked off with Dr Ahmad Al Sharif, Secretary General of the Dubai Sports Council presenting an opening speech welcoming guests to the Club. He announced there would be an international event soon hosted in Dubai. Dr Mohammed Ben Sulayem, Vice President, FIA, President, ATC UAE, then presented a passionate and engaging keynote address on his personal experiences as a sportsman and how important it is for the UAE to engage the youth and train and educate them in sport.

The iSportconnect Directors’ Club is a series of exclusive events where a specially invited audience can offer questions to speakers through a ‘Question Time’ style panel, followed by a networking reception. Yesterday’s event delved into the future of sport across the world in general and the region in detail. Real insight was offered from the panel and delegates who came from a range of different sectors.

Michael Cunnah, Chairman of iSportconnect said: “I am absolutely thrilled with yesterday’s Directors’ Club event as the first ever to be held in the Middle East. There was much interactive debate and discussion between the panel and delegates. I hope everyone had a great time and we look forward to further expanding the Directors Club events throughout the Middle East.”

After the panel discussion, delegates were invited to a networking dinner in a relaxed environment.

The iSportconnect Directors’ Club events started in London and has now expanded across the world to Paris, Munich, Milan and now Dubai. It is iSportconnect’s intention to return in the near future to host events in both Abu Dhabi and again in Dubai.