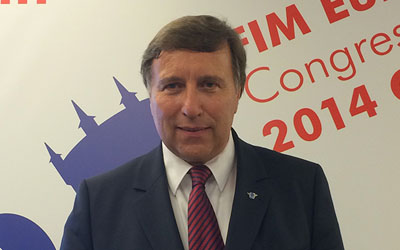 The 20th FIM Europe Congress has elected a new FIM Europe President with Austria’s Wolfgang Srb taking up the position.

He beat off competition from Wolfgang Glas from Germany after securing a large majority of votes.

With a large majority, it was Wolfgang Srb to be elected: 63 votes against 12. The Congress counted the largest number of Federations ever present, with 43 FMNs out of 47, for a total of 76 disposable votes and a quorum of 39 (34 federations had 2 votes, 8 federations disposed of 1 vote and one federation had no vote).

His main target is to strengthen the position of FIM Europe within the FIM family.

Srb said: “FIM Europe is not only the biggest Continental Union in terms of affiliated Federations, but also in terms of the biggest number of riders, licences, organisers and events.”

“There is an urgent need for a bigger financial support from FIM for European projects. There are plenty of ideas in Europe and we simply want a fair share of the subventions, taking into account that we are the biggest and most active CONU. We need to give more help to developing Federations, who have financial problems. The financial crisis, that has hit the world as of 2008, is still not over.

“I’m not here fulfil my personal things, I’m here to listen all the European Federations’ needs and to bring their messages to the right people» said Srb immediately after his election.”