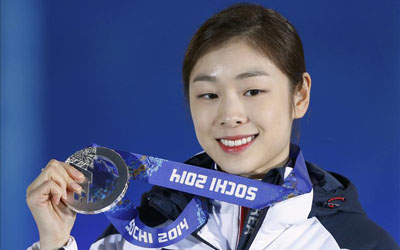 The 24-year-old will work to promote the event and engage both the domestic and international public to get behind the Games.

The Vancouver 2010 champion announced her retirement from the sport earlier this year following her silver medal winning performance at Sochi 2014.

Kim will also be an active part of the Organising Committee’s on-line promotion and advertising, which will particularly involve reaching out to young people, and combine this with her current work as a Pyeongchang 2018 Executive Board member.

The decision to make Kim an Ambassador comes as no surprise as she is one of the biggest celebrities and sporting stars in the country and the highest profile figure from a winter sport.

She also played a big ambassadorial role in the bid process, presenting to the International Olympic Committee at the deciding Session in Durban in 2011.

“The memories that I made with the Bid Committee are still fresh in my mind,” she said.

“With these memories in stow I am excited to bring the same passion and commitment with me to this new role with the Organising Committee.”

Pyeongchang 2018 President Yang-Ho Cho commented: “As a Games Ambassador for the 2018 Olympic Winter Games, we expect her [Kim] to take the lead in promoting the Games to the world”.

She becomes the sixth Pyeongchang 2018 Ambassador, following in the footsteps of baseball superstar Shin-soo Choo, as well as four figures from beyond the world of sport.