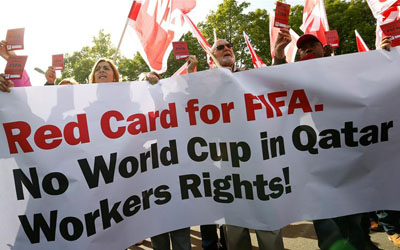 The commercial partners of FIFA have once again been urged to take a tougher stance with the organisation over the poor working conditions in 2022 World Cup host country Qatar.

At an event in London on Monday, herbal International w{jcomments on}orkers’ unions joined forces with other pressure groups to demand that FIFA  sponsors “accept their corporate responsibility and challenge human rights abuses at World Cup infrastructure construction sites in Qatar.”

The press conference was co-ordinated by sports compression wear company SKINS whose chairman, Jaimie Fuller, said that he had personally written to eight FIFA sponsors accusing them individually of effectively “contravening their own values and principles” by contributing significant sums of money to FIFA and thereby providing “implicit support” for working practices and conditions in the gulf nation.

Fuller, who was recently in Qatar, said: “The kafala problem is just the tip of the FIFA iceberg but it graphically shows their negligence and their level of self-denial when it comes to confronting international football’s major issues.

“FIFA refuses to accept any responsibility for the Qatari issue and remains riddled with allegations of corruption, mismanagement and poor decision making – all of which it refuses to confront to the satisfaction of the international community.

He continued: “So far, FIFA’s sponsors have restricted themselves to a series of rhetorical statements aimed at defending an indefensible association.”

Last year, Sony and Emirates both announced that they would not be renewing their contracts with world football’s governing body.

The campaign, entitled NewFIFANow, even used Twitter to urge people to contact sponsors on social media or via email to push for action.

Burrow said: “Qatar is a slave state. The discrimination, the racism, the denial of rights for 1.4 million migrant workers adds up to apartheid and a model of employment that is simply slavery. There is a conspiracy of silence by governments and major sporting and cultural institutions that allow it to continue. The world must not be duped by Qatar’s empty promises of reform.”

Burrow’s comments came as it was revealed that the BBC have complained that a film crew were detained and subjected to intimidatory treatment while in Qatar at the invitation of a PR firm acting for the Qatari government.

In response to the allegations, FIFA said in a statement: “Any instance relating to an apparent restriction of press freedom is of concern and will be looked into with the seriousness it deserves.”

The Qatari government hit back with a more strongly worded statement of their own, saying “We gave the reporters free rein to interview whomever they chose and to roam unaccompanied in the labour villages.

“In addition, we arranged a roundtable discussion and one on one interviews with the Minister of Labour and Social Welfare, Secretary General of the Supreme Committee for Legacy and Delivery and the Director of Workers Welfare at Qatar Foundation.

“Perhaps anticipating that the Government would not provide this sort of access, the BBC crew decided to do their own site visits and interviews in the days leading up to the planned tour. In doing so, they trespassed on private property, which is against the law in Qatar just as it is in most countries. Security forces were called and the BBC crew was detained.

“The journalists who took part in the press tour were given an opportunity for a comprehensive look at the problems Qatar is facing, and the progress the government and the private sector are making to address those problems. They saw some of the worst labour villages, and some of the best. The BBC was meant to be part of that tour, and would have been if they had not chosen to break Qatari laws.”