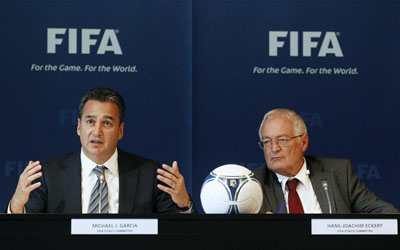 FIFA’s ethics judge Hans-Joachim Eckert has revealed the report into the bidding for the rights to host the 2018 and 2022 World Cups may never be fully made public for legal reasons.

Eckert (pictured right) is still studying the report produced by his counterpart Michael Garcia (pictured left) into whether there was corruption in the process, which led to the 2018 tournament being awarded to Russia and the 2022 event to Qatar, and expects to issue a statement on his findings by mid-November.

“The statement will contain an overview of the investigation report, a summary of the main findings, conclusions and recommendations of the report, as well as a brief evaluation of the same,” Eckert said in an interview published on FIFA’s website.

One of his tasks would be to decide which parts of the report could be made public, he added.

Eckert cannot strip either Russia or Qatar from hosting their tournaments but can press charges against individuals.

Several members of FIFA’s own executive committee have called for the report to be made public, as well as FIFA presidential candidate Jerome Champagne, a decision which Eckert said fell exclusively to him and his deputy Alan Sullivan.

Speaking Monday in London, Garcia criticized FIFA for not conducting its ethics investigations in an open manner and called for the report to be made public in line with “the goals of the reform process.”

However, Eckert clarified Garcia’s comments which he said had not called for full publication of the findings.

“The deputy chairman of the adjudicatory chamber and I now have the task of drawing up this appropriate form for publication.

“This decision is exclusively a matter for the adjudicatory chamber [of the ethics committee] — neither the investigatory chamber nor the FIFA Executive Committee can decide. The main requirement is that personal rights must not be damaged.”

Eckert added: “Publishing the report in full would actually put the FIFA ethics committee and FIFA itself in a very difficult situation legally.

“What is more, we have to respect the personal rights of the people mentioned in the report, which in the case of full publication of the report would in all likelihood not be possible.”