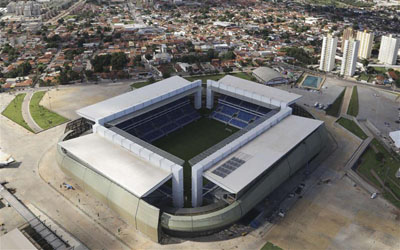 FIFA have confirmed another worker has died while working on the construction of a World Cup stadium in Brazil.

Officials have confirmed that a 32-year-old was killed after receiving an electric shock at the Arena Pantanal venue in Cuiaba.

Emergency services chief Rosenil Moraes revealed that Muhammad Ali Maciel Afonso was pronounced dead after efforts from paramedics to revive him were unsuccessful. He is the eight worker to die from stadium construction related injuries.

“Our workers followed all the protocols and tried to revive him for more than 40 minutes. But he didn’t survive,” said Moraes.

Afonso was an employee for Etel Engineering, the company responsible for the installation of information and communication networks at the stadium.

The arena, which is scheduled to stage four group matches in this summer’s showpiece, is nearing completion with the final seats set to be installed this week.

FIFA general secretary Jerome Valcke wrote on Twitter: “Saddened by the death of worker Muhammad’Ali Maciel Afonso at Arena Pantanal. My thoughts are with his family and colleagues.”