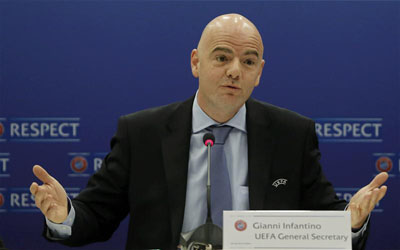 FIFA President Gianni Infantino has said he is “dismayed” his integrity is being doubted after leaked documents – known as the ‘Panama Papers’ featured a contract he signed off with two businessmen who have since been accused of bribery.

According to the documents Hugo and Mariano Jinkis bought TV rights for Uefa Champions League football and sold them on for a higher price.

Mr. Infantino said: “I am dismayed and will not accept that my integrity is being doubted by certain areas of the media, especially given that UEFA has already disclosed in detail all facts regarding these contracts.”

“From the moment I was made aware of the latest media enquiries on the matter, I immediately contacted UEFA to seek clarity.”

“I did this because I am no longer with UEFA, and it is they who exclusively possess all contractual information relating to this query.”

“In the meantime, UEFA has announced that it has been conducting a review of its numerous commercial contracts and has answered extensively all media questions related to these specific contracts.”

“As I previously stated, I never personally dealt with Cross Trading nor their owners as the tender process was conducted by Team Marketing on behalf of UEFA.”

“Moreover, as media themselves report, there is no indication whatsoever for any wrongdoings from neither UEFA nor myself in this matter.”