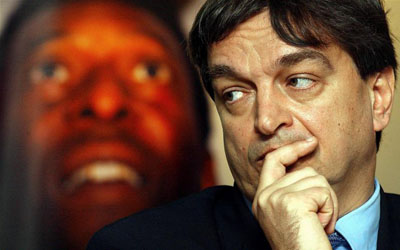 Michael Garcia has challenged FIFA to publish his initial report into the 2018-2022 World Cup bid scandal.

The unspoken threat, in a statement issued from his New York lawyers’ office, is that refusal could see him walk away from his supposedly independent role. That would throw the world football federation into chaos and fatally undermine any prospect of rebuilding a reputation thoroughly thrashed by the scandals of the last few years under long-serving president Sepp Blatter.

Garcia, the United States attorney brought in as independent investigator in 2012 after the creation of a new, ramped-up ethics system, is clearly angry over events last Friday in Zurich.

Then, on the sidelines of an ethics in sport conference hosted – but not organised – by FIFA, independent judge Hans-Joachim Eckert intimated that the report should never see the light of day, whatever ultimate disciplinary verdicts he might hand down next April.

Garcia, simultaneously, said he believed the cause of restoring FIFA’s reputation through transparency could be served only by publication, allowing for the removal for legal reasons of certain passages of the 430-page report.

Today he stepped up the pressure on the world federation – and Eckert by name – by issuing this statement from the New York office of Kirkland & Ellis:

“Given the limited role Mr Hans-Joachim Eckert envisions for the Adjudicatory Chamber, I believe it is now necessary for the FIFA Executive Committee to authorize the appropriate publication of the Report on the Inquiry into the 2018/2022 FIFA World Cup Bidding Process.

“Publication would be consistent with statements made by a number of Executive Committee members, with the view recently expressed by Independent Governance Committee Chair Mark Pieth, and with the goals of the reform process.”

By coincidence – or not – FIFA’s governing exco meets tomorrow and Friday in Zurich with Blatter due to give a closing press conference. One of the main items was expected his formal confirmation that he will stand, next May, for a fifth term as president.

Now a significant new item will have to be added to the agenda, unless the emergency committee steps in with an immediate order for publication. This is unlikely considered the legal ramifications.

Last Friday Sylvia Schenk of Transparency International immediately aligned herself behind Garcia in supporting publication, as did the British MP Damian Collins who wants it reviewed by the UK’s serious fraud office.

Last night they were joined FIFA’s Asian vice-president, Prince Ali bin Al Hussein of Jordan. He said: “In the interest of full transparency, I believe it is important that the much-anticipated report on the ethics investigation move ahead in reforming our institutions in the best interest of the sport.

“The entire football family as well as it’s sponsors and those who follow the game worldwide have a full right to know the contents of the report in the spirit of complete openness.”

Prince Ali’s words and sentiments were echoed by another FIFA vice-president, Ulsterman Jim Boyce, who is the British home associations’ representative on the executive committee.

He said: “I have stated on many occasions that if people have nothing to hide they should have no problem with the results of this inquiry becoming public knowledge.”

Also supporting publication is Frenchman Jerome Champagne (pictured), the only declared rival to Blatter for the FIFA presidency next year.

Champagne said: “We need to know is in the report because the World Cup is the biggest event of its kind in the world and we need to protect its’ sanctity.’ A good legal system involves explaining publicly what has happened and why any person or persons should be indicted or not.

“Also, we need to know because it’s an important step in rebuilding and rehabilitating the image and reputation of FIFA in public opinion.”

The FIFA code of ethics states that “only the final decisions already notified to the addressees may be made public.” But that appears to leave open the option for approval of publication.

According to Garcia and Eckert they and their two deputies – Swiss lawyer Cornel Borbely [investigatory chamber] and Australian Alan Sullivan [deputy chairman, adjudicatory chamber] – have seen the 430-page report and the 200,000 pages of supporting evidence.

No single individual in such a delicate but powerful role has ever previously challenged FIFA publicly as Garcia is doing.