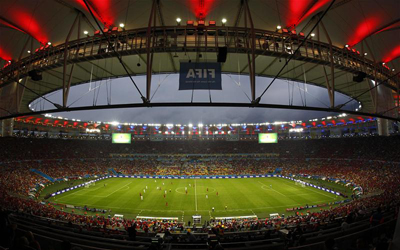 FIFA have admitted to being embarrassed that hundreds of Chile supporters broke into the Maracana Stadium ahead of their team’s historic victory over Spain in the World Cup.

Many fans broke into the media centre at the iconic venue in Rio de Janeiro, ahead of the clash at the Brazil 2014 World Cup, before 87 people were arrested.

FIFA’s Security Director Ralf Mutschke said: “It is embarrassing. I think we have to protect journalists and the media and there’s no doubt about it, we also have to protect the fans.”

An unnamed Chile supporter who managed to enter the stadium without a ticket estimated that there were 200-300 fans who raided the Maracana.

He told news website UOL: “We realised that, at the media entrance, beside the place where journalists went in, beside where (stewards) check accreditation and inspect bags, there was a gate. That gate was closed with a plastic rope. There was no chain.

“We stood there and cut that rope using a lighter.”

Since the incident, Mutschke admitted that the organisers would rethink their strategy for security at Brazil’s 12 match venues.

“We had meetings to assess the situation and make sure that this won’t be repeated and I am confident that with the measures discussed we will avoid such an incident again,” he said.