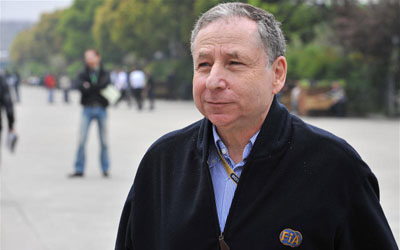 FIA Expect Russian GP to Go Ahead Despite Political Unrest

FIA president Jean Todt has revealed the inaugural Russian F1 Grand Prix will go ahead as planned despite the ongoing political unrest in Ukraine.

Concerns have building about the staging of the race following the cancellation of the Russian round of the World Superbike Championship which was scheduled for Moscow Raceway on September 21.

Superbike race organisers said that decision was reached because “the current political situation affects the capabilities of a number of key partner companies essential to run the event.”

But Todt insisted preparations for the race at a newly-constructed street circuit around the Sochi Olympic Park site remain firmly on track.

“At the moment there is no change to the calendar. Russia is on,” Todt said.

“I am comfortable with what the FIM (world motorbike federation) has done, but at the moment we don’t have any reason to reconsider any race we have on the calendar.”

Asked whether the matter would be reviewed later this year, Todt replied: “We will speak to people who are involved with all of that.

“But as I say, at the moment we have nothing that should change the running of the calendar.”

Race organisers plan to sell 55,000 tickets for the event, with overseas visitors expected to account for about 20 percent of the crowd.

Construction work continues at the facility in Sochi and a decision on how many temporary stands will be installed around the circuit is expected to be made in the next week.

“I have no doubts the race will go ahead,” race promoter Sergey Vorobyev said.

“We have construction being done at a good pace, we have the operational and sporting preparations also being done very extensively. There is no doubt from any point of view that the race will happen.

“We have entered a very active phase in the construction,” he added. “We are doing the final interior works on the team buildings, pit building and main grandstand.

“We are preparing for laying the final layer of asphalt which will be done quite soon. We are confident that in August we will have the circuit completed.”