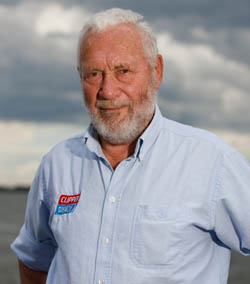 The Clipper Race has reached the half-way point in its 40,000 miles marathon around the world with the end of Race 8 of the 16-race global series into Singapore. It’s been an exciting couple of months that has also generated extensive international media coverage, not least around our participation in the classic Rolex Sydney Hobart, which doubled as Race 6. Media exposure is not only important for the brand exposure of sponsors and telling their stories but also for the profile of the Clipper Race and our crew.

We have just opened a new training base in Sydney to respond to the growing demand for crew places in Australia and South East Asia which meant we also had two of our original Clipper 68 yachts, now based there, also available to enter the Sydney-Hobart. It would have been unfair for me to have joined one of the new Clipper Race fleet, so I secured the role of navigator aboard one of the Clipper 68s. Race on!

The media had a field day and we hosted Sydney based journalists from the likes of ABC, Sydney Morning Herald, Telegraph and Australian Associated Press aboard some of our yachts during the race. We featured on every TV channel several times and attracted virtually daily features in major newspapers, broadsheet and tabloid. But as you can imagine, I was very focused on the race ahead.

The Rolex Sydney Hobart Yacht Race (RSHYR) is one of the world’s great offshore races and it has earned a well deserved reputation for providing testing conditions for sailors and their boats. Hobart is, after all, in the Roaring Forties. Our boats are not stripped out like most of the racers, they are, after all, racing around the world and carrying a lot of additional food and stores that other boats dump for the race, but we knew that, and thought the experience would more than compensate for struggling against stripped out 100 footers.

The race itself, traditionally starting on Boxing Day from inside Sydney Harbour, attracted 94 boats, including 12 from the 2013-14 edition of the Clipper Race and the two Clipper 68s. I told the Clipper Race skippers that I hoped they wouldn’t be beaten by a 68, while secretly longing to give them a run for their money.

With light winds forecast for the start it would obviously pay to go and search for the south flowing current to compensate for lack of wind. That is what we did aboard our Clipper 68, skippered by Jim Dobie with a crew of largely former Clipper Race veterans. This got us to the Bass Strait in about third overall amongst the Clipper Race boats. At this point the wind came up strongly from the northeast, ideal Clipper 70s weather, and we raced on waiting for the position updates to see how far back we had dropped.

In fact we held up well, lying fifth as we got to the lee of Flinders Island as the front passed over and the wind rose to a south westerly Force 8, gusting 44 knots in one spike. We headed in towards the Tasmania coast to reduce the fetch and thus the size of the waves and started to reel in the Clipper 70s. Derry~Londonderry~Doire had got away from everyone and was sailing very well, but the others could be targets for us and we hunted them.

By the turning point off Tasman Island we were within a couple of miles of four Clipper 70s and had everything to race for. The wind was lighter, not necessarily good for us, but you sail to your strengths not your weaknesses. As we entered the River Derwent, with ten miles to go, we discovered to our delight that there were four Clipper 70s in sight astern and only one, Derry~Londonderry~Doire, ahead. That was satisfying. What was more was to discover we had beaten the legendary Ragamuffin on IRC Handicap.

The Clipper 70s came in very close together, both on time and on handicap. At about 37 tons we did not expect them to beat the stripped out racers, but we did expect them to put up a good performance and all of them did. For the crews, well, they now have bragging rights. They have done one of the great iconic races and it was not an easy one. Well done to them all.

Now in Singapore, the yachts have put over 5000 miles between them and Hobart and the media interest continues unabated here and in China, the final destination of this leg. Television, press and digital media have taken full advantage of the video, photography and stories flowing from the boats and our in-port PR team. In fact provisional valuations indicate media coverage is 30 percent up on the previous race so far, delivering huge global audiences that would cost hundreds of millions of dollars to reach through conventional advertising channels.

Fox Sports, Channel News Asia and Star Hub’s Super Sports channel, The Straits Times and BBC are among the media featuring the race here and there’s also great interest from Chinese journalists in our next destination, Qingdao in China. Their stories extend from the human adventure to the unique business model which creates a platform for consumer brand building, promotes international trade and tourism, and even extends to social and community engagement.

There continues to be major activation by sponsors, such as the GREAT campaign promoting Britain and Northern Ireland here extensively, with ministerial support, city promotion with the mayor of Derry-Londonderry looking for business and investment with Singapore and China. Plus UK brands such as Land Rover and premium scotch malt whisky Old Pulteney.

I look forward to telling you more about this aspect of the race from China in my next installment on the 2013-14 edition of the Clipper Race for iSportconnect.

It is 45 years since Sir Robin Knox-Johnston set off on his record breaking solo, non-stop circumnavigation in 1968-69. In 1995, he established the Clipper Race, to give everyone, regardless of sailing experience, the opportunity to discover the exhilaration of ocean racing.

Now the world’s longest ocean race, 670 amateur sailors representing more than 40 nations will compete in the Clipper 2013-14 Race. They set sail from London on September 1 and will travel 40,000 miles on twelve Clipper 70’s in 15 races across all six continents, not returning to London till July 2014.