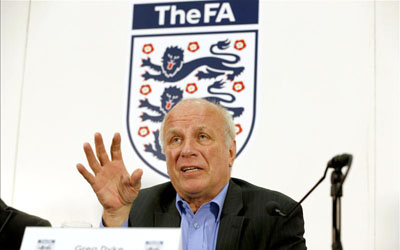 Football Association chairman Greg Dyke has called for a re-vote for the right to stage the 2022 World Cup if allegations of corruption against Qatar are proven.

The Sunday Times has claimed to be in receipt of “hundreds of millions” of documents which allegedly detail payments to FIFA officials from disgraced former FIFA executive committee member Mohamed Bin Hammam.

Qatar’s organising committee has “vehemently” denied all allegations of wrongdoing, insisting bin Hammam played no official or unofficial role in the bid.

“We will take whatever steps are necessary to defend the integrity of Qatar’s bid and our lawyers are looking into this matter,” it said in a statement.

But Dyke has joined the calls for an in-depth investigation into the allegations, although the bid is already being probed by FIFA’s chief investigator Michael Garcia.

The FA chairman told Sky Sports News: “If there is a proper investigation and that investigation says that there was corruption involved, which I know the Qataris are denying, then obviously there will have to be a re-vote.

“For a lot of people it was a surprise the Qataris won and won easily because there is no real footballing tradition in Qatar.

“It’s a small country – does it need eight football stadiums? And of course the heat there in the summer makes playing a tournament virtually impossible.

“Those who decided where this tournament was going to go were told that.”

FIFA vice-president Jim Boyce would also have no problem with a re-vote.

He told BBC Radio 5 live’s Sportsweek: “I certainly as a member of the executive committee would have absolutely no problem whatsoever if the recommendation was for a re-vote.

If the allegations are proven, Football Federation Australia have revealed they could resubmit their bid for the 2022 World Cup.

FFA CEO David Gallop said: “It’s a serious development, they’re serious allegations and we’re looking to see what the response to that will be.”

“It’s too early to say whether that re-opens the door of anything that happened a few years ago in terms of Australia’s position but it’s a bit of a ‘watch this space’ at this stage.”

Gallop added that their federation have already been involved in FIFA’s ongoing integrity investigation which is being led by US lawyer and chief FIFA investigator Michael Garcia, who is due to meet Qatar 2022 World Cup bid chiefs on Monday.

“We’ve been heavily involved in this now for many months in terms of the investigation that Mr Garcia is carrying out,” Gallop said.

“I’m sure when we’re in Brazil for FIFA congress then we’ll find out more information, but don’t be under any illusion that we haven’t been involved in all of this for some time now.

“We’ve been involved in interviews, production of documents and also following carefully what’s been happening away from Australia. We’ve got people who’ve been involved for some time now.”