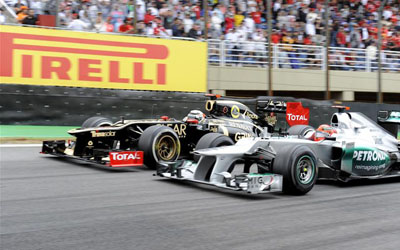 Lotus F1 have extended their deal with the Microsoft Corporation. Following the successful first phase roll-out of Microsoft Dynamics at the team’s factory in 2012, doctor the remainder of the current contract has been extended from two to four years.

Patrick Louis, Chief Executive Officer, Lotus F1 Team, said: “It is fantastic for Lotus F1 Team to strengthen our relationship with Microsoft. Such a proactive move illustrates the high regard they have for our business. Through the implementation of Microsoft Dynamics at Enstone we are evaluating every aspect of how we work and the improvements in efficiency allow us to become yet more competitive on track. We have seen the fruits of this partnership in 2012 with Phase One of the project; Phase Two is well underway. Extending the commitment and partnership with Microsoft Dynamics until at least the end of 2016 is especially rewarding in the current economic climate.”

Christian Pedersen, General Manager, Microsoft Dynamics ERP Product Marketing, added: “As an official Business Transformation Partner of Lotus F1 Team in 2012 we have witnessed exciting times; both in the factory, where Phase One implementation of Microsoft Dynamics and Lotus F1 Team’s business transformation was completed in record time, and on track, where we have seen results and exposure beyond our expectations. We can herald this partnership with Lotus F1 Team as a best-practice for our existing and new clients. We are excited to strengthen our bond further and look forward to see the manifestation of this hard work in the factory with even stronger results in 2013.”

As the Official Mobile Computing Partner for the Mercedes AMG Petronas F1 Team, BlackBerry will collaborate with the team on technical and marketing opportunities. The new BlackBerry 10 platform will deliver tools and services for Mercedes AMG Petronas and fan engagement will be improved through the joint development of apps. BlackBerry 10 smartphones will also be used by the team so they can ‘keep moving’ throughout the Formula One season.

The new partnership sees the iconic BlackBerry branding featured prominently on the chassis and headrest of the F1 W04 Silver Arrow, the racesuits of Lewis Hamilton and Nico Rosberg, and on the team’s racewear kit. As the Official Mobile Computing Partner, BlackBerry and Mercedes AMG Petronas will be working closely together to develop the team’s use of the BlackBerry 10 platform at the team’s headquarters and at each Grand Prix.

Ross Brawn, Team Principal at the Mercedes AMG Petronas Formula One Team commented: “On the day that our new Silver Arrow, the F1 W04, is launched, we are very pleased to announce our partnership with BlackBerry. We are looking forward to embracing the new BlackBerry 10 platform at both a technical and operational level, as well as collaborating with the team at BlackBerry to bring new mobile innovation to Mercedes AMG Petronas. It is especially pleasing to be able to launch this exciting partnership today as our latest Silver Arrow takes to the track with BlackBerry branding.”

Frank Boulben, Chief Marketing Officer at BlackBerry, said: “Formula One is all about precision engineering, design and innovation – three values that mirror the approach that’s gone into creating BlackBerry 10. It is a natural fit for BlackBerry to partner with the Mercedes AMG Petronas Formula One Team to deliver value through technical and marketing collaboration. We have built BlackBerry 10 to keep people moving, and we believe the essence of this will be delivered at many levels through our partnership.”