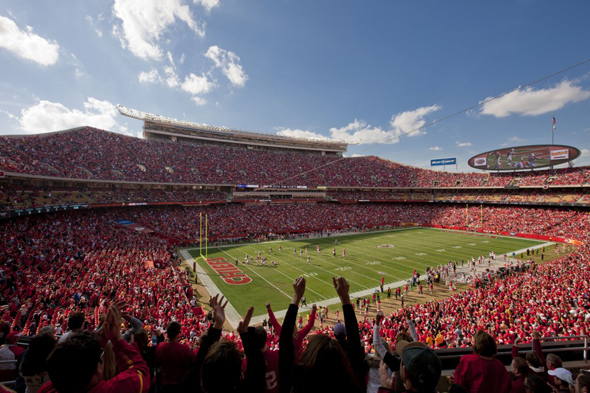 NFL Renovations for the Future by Populous’ Scott Radecic

With the NFL 2016 regular season underway, American football fans return to stadiums across the United States – and the world in the case of the NFL’s burgeoning international series – to revel in the action. They do so with a host of alternative and competing game experiences at hand, from home theatres to pubs to mobile streaming. So what keeps them coming back to the in-person experience?

As my colleague Scott Radecic explains, NFL franchises continue to renovate stadiums with the help of experts like Populous to offer fans the best of both worlds: the comforts of home and face-to-face camaraderie.

The NFL fan experience is evolving and no one can deny it. According to a survey by ESPN.com, only 29% of NFL fans prefer to watch the game in person at a stadium, compared to 41% in 1998. Why you ask? There are more NFL fans than ever before with more access points including television, the internet, smartphones and tablets. To be a fan, you don’t have to have season tickets, you simply have to have internet access. While this accessibility has allowed the NFL to reach a record-high popularity, it has also left architects, stadium managers and owners exploring how we can entice fans to return to the stadium.

Now, we’re taking our cues from what fans enjoy most about the in-home experience – the unparalleled accessibility to information and the comfort factor – and finding ways to transform the stadium experience accordingly.

A number of NFL stadiums have recently undergone large-scale renovations, with the primary focus of creating an experience that is intimate, driven by access to technology and other fans and in turn, provides clear value for the ticket price. Populous has taken this issue on, leading innovative renovations that are reshaping the experience of attending an NFL game. There are a number of ways we’re accomplishing this, most of which fall under one of the following categories:

The evolving expectations of fans are undoubtedly at the core of innovation in the NFL. When fans reach the stadium, how do we capture their attention? How do we ensure their experience is as comfortable as it would be at home? What opportunities can we offer fans who attend a game that they simply wouldn’t get at home? We’re answering these concerns by exploring ways to provide fans in the stadium with exclusive content and access. We’re also planning for bigger scoreboards and videoboards with clearer pictures. We’ve improved the Wi-Fi availability within stadiums so fans can stream content constantly and share their experience without losing track of their fantasy football team. In addition, we’ve created smaller neighborhoods of seats within the stadium, ensuring that fans feel they are part of something more intimate. From loge boxes to club seating, there are more options and experiences to keep fans coming back.

Technology and the way that the modern fan engages with the game socially has played a crucial role in the decisions we make when renovating an NFL stadium. We’re not just planning for current technology…we are planning for where technology will be 5, 10 and 15 years down the road. Fans expect to be able to share their tweets, videos and photos in real time and have them displayed in the stadium. In addition, virtual reality and access to stats and data that users at home don’t have will further differentiate the stadium experience and cater to the fantasy football fan.

By repurposing under-utilized areas of the stadium, we can create unique experiences that rival and exceed what you experience at home. This is done in a variety of ways, but most prominently by creating social gathering spaces, branded environments, various premium seating options and engaging sponsor access points. These social gathering spaces become experiences in themselves functioning as destinations within the destination. This may include a full-service sports bar with clear sightlines and a close proximity to the field or a technology hub. An increasing fear of missing out on something special drives younger generations to be seen in one-of-a-kind environments.

Populous is working with our NFL clients to find innovative ways to give unparalleled access to fans and create experiences that will not only rival the in-home experience but exceed the expectations of the modern fan. Whether through branded social gathering spaces or the integration of the latest technology, we’re creating destinations that make the in-stadium experience both incredible and irreplaceable.

Scott Radecic is a senior principal at Populous and a leader of the firm’s National Football League market.

Throughout his 30-year career, he’s built extensive experience in all areas of sports facility strategic planning, design, budgeting and project management and has become a trusted advisor to professional teams across the nation.