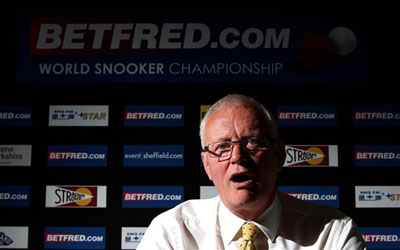 Barry Hearn, Chairman of World Snooker, has revealed that the Snooker majors will remain at their spiritual homes, despite the temptation to move one to the booming Chinese market.

Reports have been circulating that the World Championships will move from it’s home in Sheffield but Hearn suggested it would be very unlikely the sport will move from the Crucible.

“We have a great relationship and history with the Crucible in Sheffield and the fact the Crucible has been the home of snooker for so many years,” he told iSportconnect.

“It can be a tempting thing, but basically, you can’t mess around with history. It’s not the same, Wimbledon is Wimbledon and the World Snooker Championships is the Crucible in Sheffield and it’s going to be very unlikely to move that event elsewhere.

Ever since Ding Junhui burst on the scene with a victory over seven-time world champion Stephen Hendry in China in 2005, snooker has risen in popularity in mainland China, resulting in a greater demand for bigger events.

However, Hearn believes that rather than moving a major to China, steadily building one of China’s five major ranking events would prove a better option.

He said: “What I’d rather do is build up other events in other parts of the world which are significant in the growth of the game.