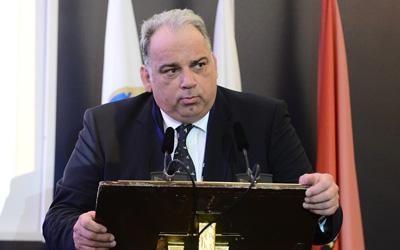 Exclusive: ‘We are the favourite’ for 2020 Olympic Games says Wrestling President

The President of the International Federation of Associated Wrestling Styles (FILA) has said that wrestling is the favourite to be added to the 2020 Olympic Games in the eyes of their competitors and the IOC.

In an exclusive interview with iSportconnect, President Nenad Lalovic said that at the SportAccord Convention in St Petersburg, Russia in May, wrestling was the only sport to receive eight votes from the IOC and be elected in the first round of voting.

Wrestling was in an eight-way battle to be included in the 2020 Olympic Games along with baseball/softball, squash, sport climbing, roller sports, karate, wushu and wakeboarding.

Baseball/softball and squash joined wrestling in making the cut at the Convention and now the three sports have until September to convince the IOC they are the sport to be at the Games.

Speaking exclusively to iSportconnect, Lalovic expressed his optimism: “We are the favourite and that was clearly said by our competitors at St Petersburg,” he said.

“We did it (the presentation) very well in St Petersburg and we were the sole sport to be elected in the first half with eight votes.

“All the other sports got around six votes and we got eight immediately.

“That makes us optimistic.”

Lalovic went on to add that whilst FILA would ‘not sleep’ on the success of the meeting in Russia, he believed the next session ‘should be in the same percentage’ as the SportAccord Convention, which would put wrestling  in pole position to be a part of the 2020 Olympic Games.

The 125th IOC session takes place in September in Buenos Aires. The IOC will not only decide what sport to add to the 2020 programme, but also what city out of Istanbul, Madrid and Tokyo will host the event.

The IOC will also elect a new President, with Thomas Bach, Ng Ser Miang, Richard Carrion, Wu-Ching Kuo, Denis Oswald and Sergey Bubka all in the running to take the position.

Do you think wrestling is the favourite to be added to the 2020 Games? Join the Road to 2020 Olympic Games community and leave your view here >>