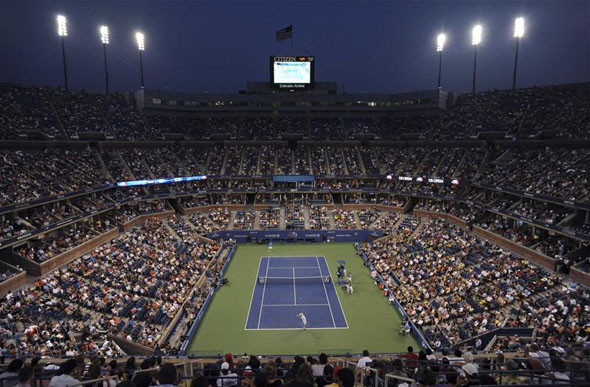 Exclusive: US Open ‘actively’ Looking to Put a Roof over Arthur Ashe Stadium

Jon Vegosen, Chairman of the Board and President of the United States Tennis Association, has revealed that the federation has assembled a team of the world’s best structural engineers and designers to plant a roof over Arthur Ashe stadium, but as yet to no avail.

This year’s US Open at Flushing Meadows, where Arthur Ashe is based, was haunted by blustery conditions and Vegosen didn’t hide the fact that they were fully supportive of building a roof to prevent future complications.

“Let me be clear: We very much want a roof,” Vegosen told iSportconnect.

“Nothing would make the USTA happier than being able to announce to the players, our fans, and our partners that we have a plan to put a roof on Arthur Ashe Stadium.

“We are diligently pursuing all options, and we will have a roof one day.”

Despite a bout of defiant optimism, the lifelong tennis enthusiast does face an ‘enormous’ conundrum with the design of the stadium, which has hampered progress to this day.

He added: “The original design of Arthur Ashe Stadium would not support a roof, and one would need to construct an edifice around and over Ashe to support a roof.

“The span and size of our stadium creates an opening about five times the size of the opening that Wimbledon had to cover on its Centre Court, presenting additional challenges.

“And, of course, there are air handling and temperature challenges to be addressed.”

However, with technology always developing, Vegosen is seeking to tap into the minds of the world’s best structural engineers and designers to solve the puzzle.

He concluded: “We have seen new ideas over the last 12 months, and our goal is to tap into new technologies to create innovative solutions.

“For example, with new materials, there is a chance that we can re-engineer or rebuild the entire upper bowl of the stadium to reduce the overall weight by replacing the existing concrete with equally-strong but lighter material.

“This weight reduction could then be applied to roofing solutions, for example, a retractable canopy. Presently, we do not have a design that works, but we are actively pursuing our options with the best structural engineers and designers in the world.”

The construction of a retractable roof over Wimbledon’s Centre Court and the Australian Open’s Rod Laver Arena has proved incredibly successful in tackling mother nature and all the problems that it creates. It seems that the US Open aren’t too far away from finding an ace and emulating its fellow Grand Slams.

Jon Vegosen spoke exclusively to iSportconnect. Stay logged in to read the interview in its entirety next week.