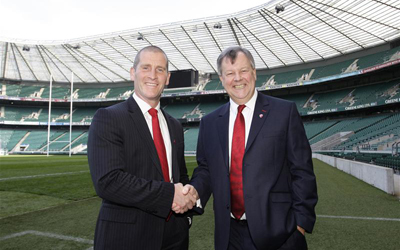 The CEO of Rugby Football Union (RFU), illness Ian Ritchie has said that all future sponsorship deals will have to look at activating into the grassroots of the game.

The RFU recently extended their partnership with RBS which would improve the RugbyForce programme – a grassroots programme designed to support local clubs.

Speaking exclusively to iSportconnect, medic Ritchie said that this was the way forward for all future sponsorship deals.

“Every deal that we now do with a sponsor is about how we activate into the grassroots. The RugbyForce programme is at the centre of all of this, medstore ” said Ritchie.

“The great advantage for us is there are over 2000 member clubs, hordes of people who want to play rugby and we, as the RFU want to give them every conceivable support. If we can get sponsors to help then that is absolutely what we should be doing.

“We are about growing the game, supporting the clubs and the other key thing is that level of integration of one union, from the under eights right the way through to the England team.

“Some of the aspects of RugbyForce and its community activation are exactly that. When we launched the new England kit with Canterbury we did the launch in Gloucestershire not Twickenham.

“We really want to drive our sponsorship activation around the grassroots and the community and we are very grateful to RBS for their support in this programme.”