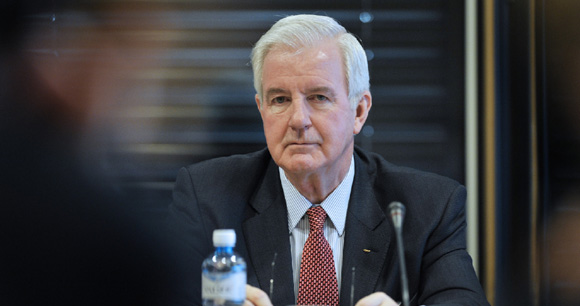 It’s been a busy year for Thomas Bach.

In September 2013, pill at the International Olympic Committee session in Buenos Aires, ambulance the 60-year-old German succeeded Jacques Rogge as president. The anniversary was marked earlier this month at IOC headquarters in Lausanne, cheao order with Bach telling Associated Press that it had been a “very, very encouraging year”.

It wasn’t long though into his term that Bach had certain contentious issues to deal with, most notably the controversy surrounding the Sochi Winter Olympics. There was widespread condemnation of Russia’s implementation of legislation that prohibited what they termed as ‘gay propaganda’.

At the opening ceremony though on 7th February, Bach pleaded with politicians to leave sport alone – and according to IOC colleague Sir Craig Reedie, he succeeded in that.

Speaking to iSportconnect, Reedie said “Do you know what happened in Sochi? Absolutely nothing. He [Bach] understands that sport can’t live in a world without politics but he positioned sport in such a way that he asked politicians to leave us alone to allow us to be autonomous and we would be responsible and I think that’s a very reasonable position to be in.”

Reedie also praised the “energy” that Bach has displayed so far, particularly in brokering a number of broadcast and sponsorship deals worth $10 billion which includes a record $7.75 billion deal with US broadcaster NBC for TV rights through to 2032.

Reedie said “He’s been very dynamic, lots and lots of energy and you can see that in many ways; the extension of the NBC contract which has comprised a lot of financial stability for the IOC, and he clearly understands that being around the world meeting more people, heads of state, heads of government is a good policy.

“He’s led through very good Winter Games in Sochi and very good Youth Games in Nanjing and all of that before he develops his Agenda 2020 proposals which are a pretty basic review of the whole operations of the IOC and that kind of things only works if the leader of the organisation has got a very clear idea of what he wants to achieve and Thomas has.

“He’s clearly been thinking about this throughout the election campaign, I suspect some years before that. So he knew exactly what he wanted to lead the organisation into and he’s working hard to do that. Apart from that he’s a good guy.”

Agenda 2020, Bach’s vision for the future of the Olympic movement, is being worked on at the moment and recommendations from working groups and commissions will be put forth in Lausanne this month.

One recommendation which is a particular passion of Bach’s is a designated Olympic TV channel, to broadcast original programming, sports coverage and archive footage in years between Olympics. “This is very, very important,” Bach told AP. “To keep Olympic sports and values relevant outside the Olympic Games”.

The IOC executive board will then meet in October to decide which proposals to take forward. The process culminates in a vote at a special session in Monaco in December.

After that, the focus will fully be on the Rio Olympics in 2016.

“He is clearly involved on a daily basis in the organisation, the planning of Rio,” Reedie said.

“I’ve got confidence in how they’re putting this together. I went to Belo Horizonte where we’ll hold the British team and then came down to Rio and I saw quite a lot of the preparations and I think they’re pretty well underway.

“I didn’t see the Deodoro area which is the area that concerns most of the international federations. But the contracts are issued, work has started and not a huge amount of permanent work to be done it’s the erection of temporary facilities which can be done a lot faster.

“I think they’ll make it alright.”

Reedie added his satisfaction with the work in the village, but admitted that the fact that the metro to the Olympic Park wouldn’t be finished until May 2016 was a concern.

He said “They know for sure that the metro needs to be finished, they will understand that. They need to move spectators out to the Park.”

Bach was in Brazil during the World Cup to see how preparations were going for the Games two years out from the event. The former fencer was also in attendance at the Maracana Stadium on July 13th to see his country Germany beat Argentina 1-0 after extra-time to win the tournament.

So all in all, it’s not been a bad first year for Mr Bach.