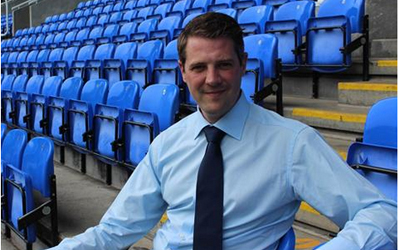 Reading Football Club are aiming to compete with Premier League clubs in England with a revamp of their commercial strategy.

The Royals hired Ben Wells as their new Commercial Director last week and the former Chelsea man has immediately set out ambitious goals.

Instead of simply selling advertising and using the traditional sponsorship model of media and hospitality – a method Wells (pictured) described as ‘tired’ – Reading will be looking for ‘full-on marketing partners’ and to implement other innovative strategies.

Speaking exclusively to iSportconnect, Wells said: “My ambition here is that even though we are not one of the bigger clubs in the country, there is no reason why we cannot be giving the big boys a run for their money in terms of innovation and creativity.

“The strategy I am building here won’t happen overnight but we are looking at a medium to long term approach. We are not piling things high and flogging them off which is what clubs tended to do in the past.

“We have to get our fans and our customers closer to the club as well. It is not just the people who come to the games.

“That is the plan ultimately to build a very data-led, customer centric sales proposition.”

Although Wells has only been at the Madejski a matter of days, he has already begun work on the new strategy and admitted that things will be done differently this season, but fans will ‘start to see the bigger effect of it from next season onwards.’

The new strategic plan will be modelled on the expectation that the club return to the Premier League, having been relegated during the 2012-13 season.

“You cannot have the doomsday scenario where if you go down you have to revise your budgets. That is not a way of building long-term business stability.”

Reading kick off their Championship campaign at home to Ipswich Town on Saturday Aug 3.