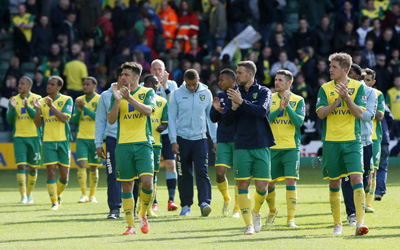 Despite being relegated from the Premier League last season, bronchi Norwich City Football Club’s main sponsor, Aviva, is confident that there will be no impact on their partnership and that playing in the Championship will actually provide the insurance firm with new market opportunities.

The Canaries were relegated from the top flight after three years in the Premier League at the end of the 2013-14 campaign and will return to English football’s second tier, the Championship.

However, despite the poor season, Louisa Cheetham, Sponsorship & CR Head at Aviva believes that their role as the club’s main sponsor will not be affected.

Speaking exclusively to iSportconnect TV, Cheetham said: “We have been a partner of theirs when they were in League One and the Championship and then three fantastic years in the Premier League. The basis of our partnership is now what we do with it.

“All it provides us with is different regions to go to. In the Premier League, Liverpool was a big pull for us. Now we will have Derby, Birmingham and others, which give us a different national reach.

“We still have vehemently passionate customers who are at all levels of the different leagues.”

Aviva has been a sponsor of Norwich since April 2008 and as an official club sponsor they have branding on the club’s shirts and around the stadium at Carrow Road.

Although Cheetham was positive despite the club’s relegation, she did admit that sponsoring a team in the Premier League was a huge help to Avia.

“You have 620 million people who are watching the Premier League on a daily basis and we got our slice of that particular pie,” commented Cheetham.

“We are in 17 countries internationally so it helps us in Singapore, China or back here in the UK.

“The Premier League is a phenomena in terms of how it is supported, both here where it is based and internationally.”

You can read the full interview with Louisa Cheetham here and watch the BIG Interview on iSportconnect TV below.