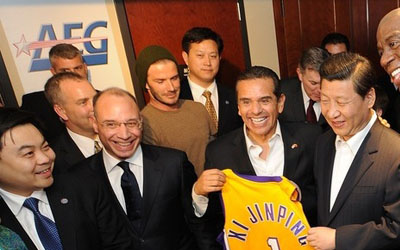 Exclusive: More Chinese Athletes Will be Able to Negotiate their Own Deals says AEG China CEO

It will become more common for Chinese athletes to have greater autonomy for schedules, thumb sponsorship deals and endorsements according to John Cappo, buy cialis CEO of AEG China.

The majority of Chinese professional sportsmen effectively work directly for their federations and are subject to the federations’ schedules and sponsorship and endorsement deals.

Athletes who have negotiated individual deals in the past have sometimes faced serious consequences; Tian Liang, a successful member of the male Chinese Olympic diving team was dropped, reportedly because of his commercial activities.

But Cappo was involved in a groundbreaking deal when he helped female tennis player Peng Shuai become the first player to be signed to a foreign agent by agreeing a deal with Max Eisenbud and believes more athletes will enjoy greater freedom in future.

In an exclusive interview with iSportconnect, Cappo said: “More and more athletes in China will have an opportunity to branch out on their own and it will be a hybrid system from the start, partly controlled by the federation and some autonomy to do their own thing but they’ll all have to come back and represent China for maybe the national games in China, the Olympics and be part of national teams for different events.

“Federations here are finding their own sponsors for teams, so it’s hard for a player if he endorses Adidas to come back and wear a Li-Ning shirt.

“They’re trying to make it happen but I think it’s pretty difficult. That’s where there will still be a bit of a challenge and there’s a little bit of a balance with that, there’s carve outs for select events in the deals.”