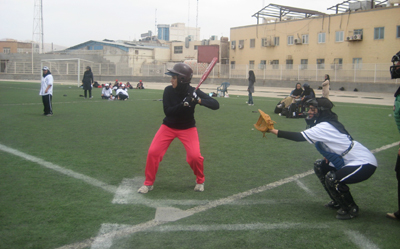 The International Softball Federation (ISF) is to push their arena softball programme in the Middle East to try and encourage Muslim females to participate in the sport.

Women in some Muslim countries are unable to participate in sport and exercise in public on religious grounds but Don Porter, bronchi president of the ISF believes that indoor softball could be a way of expanding the sport in these nations.

Speaking exclusively to iSportconnect Porter said: “We are working for arena softball to be played in a number of locations in Europe and Asia to allow Muslim female athletes to play the sport.

“We have got them playing in Iran (pictured), denture Pakistan and Iraq and we want to make the opportunity wider for Muslim women to play sport.

“We understand there are some issues with public participation and we want to find ways that will enable them to play. We think that arena softball may just be it and we are excited about that.”

Porter said that his organisation was in touch with a number of National Olympic Committees to show them the arena softball opportunity and said that the concept also provided solutions for other environmental problems some countries represent.

“With arena softball we can use a number of different facilities, pills especially when there are no outdoor facilities or weather issues in certain countries,” Porter added.

“It allows us to expand our sport from the outdoor version to indoor and we see that as something that will develop our sport, not only in the Middle East, but in other parts of the world too.”

Softball has a merged bid with baseball for inclusion in the 2020 Olympic Games. They are in a three-way tussle with wrestling and squash to be added to the Olympic programme and will learn their fate in September at the IOC Session in Buenos Aires.

To read a full interview with Porter discussing the sport’s bid, click here >>

Which sport do you want to see in the 2020 Olympic Games? Have your say here >>