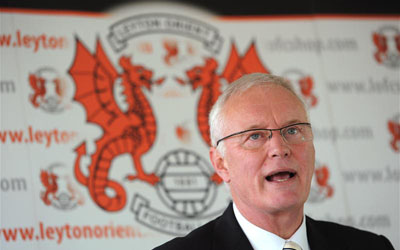 Leyton Orient chairman Barry Hearn will change the club’s name to London Orient in a bid to claim the Olympic Stadium for the East London club.

Mr Hearn, also the head of World snooker and Professional Darts Corporation, says that a ground-share with West Ham would be the best way of securing the long-term legacy of the stadium.

He told iSportconnect exclusively that there is the opportunity for “a great advert for the London Olympics and the legacy of it.” He also argues that West Ham claiming sole-ownership would merely subsidise the clubs large debts. “We can’t go around with taxpayer’s money giving stadiums to people” he argues.

Such a move would have to fit around the World Athletics Championships, due to be held at the stadium in 2017. Mr Hearn thinks that “the stadium’s got an awful lot of work to be done with it to make it fit for football, and I don’t know how long that work’s going to take. It should be finished before 2017, hopefully well before 2017.”

Mr Hearn says that Leyton Orient would have to be lucky enough to rise from League One – English football’s third tier – to justify the move, but he has plans in place to boost the team’s attendances from 5,000 to 30,000 fans, including “giving tickets to the under 18s and to the armed forces” and arguing that both the club and the legacy committee “have to take a long-term view, I think we have to invest in the future”.

The Matchroom Sport chairman also argued that the most ardent of fans may not be happy with the move, but says “we’re already in consultation with all the fan’s groups and the reaction has been quite positive.” He says that such a move could be crucial in ensuring that the club plays in the stadium, which will see its capacity reduced to accommodate the football club as a tenant.

As for the whole stadium selection issue, Mr Hearn says that the process has been “befuddled”, due to “a lot of changes in attitude throughout the entire process. The stadium wasn’t going to be designed football, then it was, but it’s a very complicated scenario, so it’s understandable”.

Barry Hearn was also on our panel for the Directors’ Club. Check it out here>>