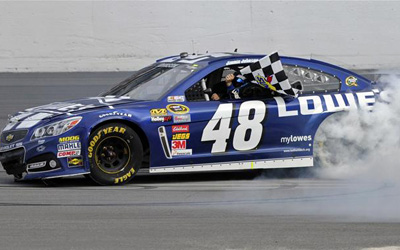 Exclusive: Hawk-Eye to Provide Technology to NASCAR and Look to Further US Expansion

Hawk-Eye Innovations are working on a project to provide their services to NASCAR in the United States, cheap iSportconnect can reveal.

Hawk-Eye have provided their Goal Line Technology in this year’s English Premier League and has provided ball flight tracking assistance in tennis and cricket for a number of years.

Although the exact details of the NASCAR project were not made available, the deal marks the first time Hawk-Eye have provided their services to a US-specific sport.

Speaking exclusively to iSportconnect, Dr. Paul Hawkins, Founder/Creator of Hawk-Eye said: “We are working on a NASCAR project out in the States. It is early days so I cannot give the details of what we are specifically doing.

“We have been doing tennis in the States for a long time but it is the first American specific sport that we have entered into.”

Technology in NASCAR has been the subject of debate for some time, with in-car technology suggested as the alternative to solving the debates around restarts.

There have been suggestions that an in-car technology could simultaneously tell drivers when to go.

Dr. Hawkins also confirmed that he was looking for more business in the States and that the region would be a key market for Hawk-Eye in 2014.

“There are plans for other sports in the USA,” said Dr. Hawkins. “We have not won any of them yet so I don’t want to say too much in terms of particular sports.

“There will be a lot of focus on the States which is where we want to grow into.”

The full interview with Dr. Paul Hawkins can be read here