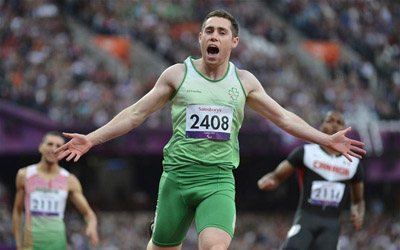 The Government and Irish Sports Council have boosted Paralympics Ireland (PI) with a 10% year on year increase, in a move that the CEO believes will attract commercial sponsors.

The Minister for Tourism & Sport, Michael Ring TD announced an investment of €910,000 to PI for 2013, which was a part of a package of support to Irish High Performance sport of €8.6m, which includes direct support to 25 Paralympians.

Speaking exclusively to iSportconnect, Harbison said: “The funding announcement this morning relates specifically to investment from the Irish Government. Other funding sources are being sought from the Northern Irish Government via Sport NI and via commercial sponsorship.

“The vote of confidence from the Government this morning certainly assists in the recruitment of commercial sponsors as it demonstrates Paralympics Ireland’s consistent ability to provide a significant return on any investment.”

Traditionally PI received a 20-30% funding cut in the year following an Olympic Games, but a successful London 2012, where Ireland picked up 16 medals, has been rewarded with the increase.

Harbison added: “The real increase of 10% is a direct response from Government to our request to strengthen our performance programme and restructure our organisation for the coming cycle.

“It is important that the investment in Paralympic sport continues to grow throughout the four years to Rio to ensure we can sustain the success of London.”