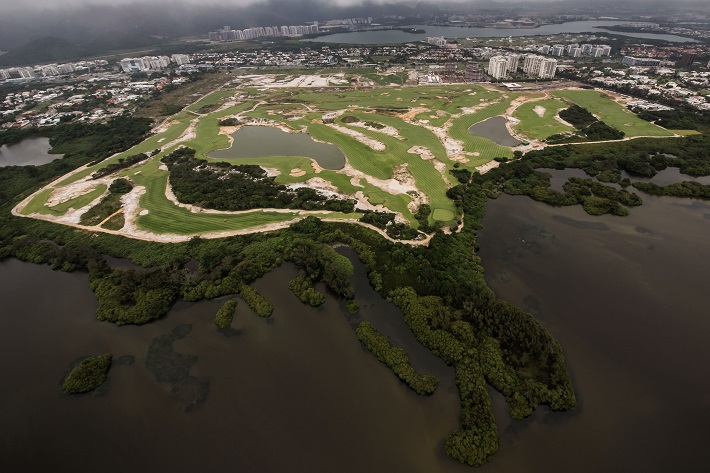 As Rio approaches, two sports will be more excited and/or nervous than the rest – golf and rugby 7s.
Both sports will be going to their first Games, at least in living memory, and the International Golf Federation’s Executive Director Antony Scanlon says they are ready for the attention of the world:
“We’re getting there. The golf course looks fantastic, we’re excited and the players are excited. We had a great test event in March, the players loved the course, other experts in the golf world who were there think it is going to be a challenging course for the players, and from that we’ll get a worthy champion.”
“It has been 112 years coming! We’ve spent six or seven years working pretty hard towards it, and we are pretty confident it will be a success and the players will have a great experience.”
The process has been a long and hard one, made more difficult by the fact that Rio is not a traditional golfing city. The course had to be specially built at Reserva de Marapendi and Scanlon hopes its legacy will live on well after the Games.
“Rio, the great city that it is, isn’t really a golfing city, nor is Brazil a golfing country. Normally we have a large choice of golf courses in any city. In this case we didn’t, so working with the private sector we built a golf course. A golf course which will have a great legacy for the sport and the city.”
“It will be the only public golf course in the whole of Brazil. Post-Olympics we see a great future for the course and the development of golf tourism to add to the already wonderful tourist destination that Rio is. The course is there, now it’s all the detailed planning leading up the Games, making sure the players have a great experience… We’re close to the finish line!”
The Olympics will be the biggest two weeks of IGF’s near 60 year history. The federation is an unusual one, in so far as they are not the guardians of the rules of golf, which is handled by the R&A and USGA. It also doesn’t organise the sports’ premiere events, the majors.
But for the Olympics Scanlon explained that major players in the golf world are coming together under the IGF to help put on a show to remember in Rio.
“We’re really a great example of collaboration in golf. Under this body [IGF] we have 146 amateur or national federations. Then in addition to that, around 30 professional tours and PGAs. With that we encompass both facets of golf. The amateur bodies, the amateur part of the game, and the professional part. We’re all working together to deliver this competition. So the people who are helping the IGF, and assisting us on delivering the competition in Rio, are actually all the people who are organising all the majors. Effectively the collaboration means we have the best people in golf working with us on that project or any other project that we do.”
Core to the success of the event will be the calibre of players that come to Rio. The idea of the world’s top players fighting for gold is an exciting prospect. With only four top ranked players from each country being permitted to go, qualification for the Games will be fierce, particularly in the USA, which Scanlon is pleased with:
“We’re seeing really strong commitment from the US players and the team.  That’s never been an issue for us. You’ll find all the top players, who are currently qualifying, and they are fighting amongst each other, both in men’s and women’s, as they are limited to a maximum of four per country, if they are within the top 15. Within the men’s rankings there about eight US players that have the potential to come into the team. So we have seen great commitment from the US.”
“We’re lucky to have a really strong field, but also diversity in the field. We have, in both the men’s and women’s event, 42 nationalities represented. We’re going to have a worthy champion, but also a very diverse audience.”
While getting top players to the events is a good start, the next step will be establishing the prestige of the event. At least for now, the four majors will likely overshadow the Olympics.
But golf have a helpful yardstick: tennis.

Tennis has many similarities with golf: both major sports in their own right, with no or little Olympic history, the calendar dominated by four events, with top players having massive pulling power.
Scanlon said the IGF had consulted the International Tennis Federation on their learnings and what to expect:
“It will take time. We have a great relationship with tennis, they have said that it was a 28 year journey for them to acceptance… Shown by the wonderful image of Roger Federer falling to his knees after winning gold in Beijing in the doubles.
We don’t expect as steep as commitment curve, ours will be a bit flatter, over time the time I’m sure the players will value the medal. We may have an Olympic champion, who straight away, sees this as a great milestone in their career.’
If all goes well, the hope will be that golf will be exposed to a new generation of fans and potential players. It’s a rare opportunity to engage with a huge group of people – and the IGF are bracing themselves for a wave of interest:
“We’re working with our federations, we’ve been in a number of conference calls with them to make them ready for, hopefully, an impetus of new fans and new participants, and for them to cater for that. It’s the first time in 112 years, from what other sports are saying to us, there is a period of interest in a sport once it is viewed on the Olympics and we’re preparing for that.”
But there are still hurdles to get over before the Games. Most notable is the Zika virus – a serious health concern that the IGF, along with all sports, have to contend with. Scanlon and the IGF will follow IOC advice:
“It seems to be every Olympics there is something. H1N1 in the past for example. Zika is a concern, our medical team have been in constant contact with the IOC, who in turn have been in contact with WHO, and whatever advice we have, we will in turn pass onto the athletes. At each of the independent tours, the chief medical officers have been available to the players to allay any concerns they may have. But we’re confident it won’t be a major issue and the players will be there.”
Golf’s involvement in the Games is guaranteed for 2020, but all sports’ involvement in 2024 is up for debate, based in part on how they perform in Rio.
To that end, expect the IGF to pull out all the stops on their first Olympic tournament since 1904.