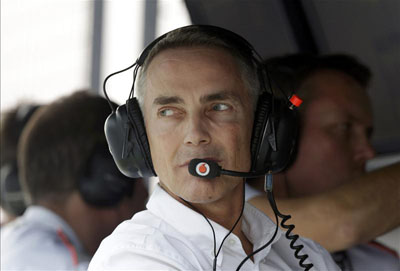 Whitmarsh spent almost a decade working for McLaren Racing, as CEO, and later as team principal, before leaving the sport in 2013 to work for Ben Ainslie Racing.

The main issue Whitmarsh has with the sport is the level of dominance Mercedes are enjoying – which is affecting interest levels.

“Formula One is a real challenge. It’s a technically advanced sport, it’s a great sport, and I had the pleasure of being involved in it for 25 years.”

“I look at it now with some sadness. What’s happened is the regulations have led down a path where you have a dominant team, and all credit to Mercedes, they’ve made a tremendous investment and commitment to that sport.”

“There’s always been this in Formula One and it suffers from that. It probably has to re-think the direction it’s going.”

Formula One picked up some much needed good press at the Spanish Grand Prix as Max Verstappen took advantage of a rare Mercedes off day to become the youngest ever Formula One race winner.

For Whitmarsh that kind of excitement is key to the success of any sport, and F1 is suffering from its predictability.

“Sport is about emotion. To have that emotion there has to be some unpredictability. If it’s predictable then frankly it’s not entertaining, it doesn’t bring that emotion.”

“When something happens that people aren’t expecting, when the little guy wins, when there’s a great turn around when the event turns out rather differently then had looked five minutes ago, that’s the bit that we all remember.”

Formula One looks set to undergo major change for the 2017 season, in an attempt to try and make the cars faster and more appealing.

But for Whitmarsh, the sport needs to be affordable so that many teams can challenge for wins, as opposed to just the biggest.

“There is some extremely complex technology in the powertrain right now. They went down the right path of making it greener, but in so doing they didn’t control costs.”

“They didn’t prohibit domination of a very determined team or organisation like Mercedes-Benz. You have to give every credit to Mercedes, they are doing what they need to do as a business. But for the business of Formula One it’s not the right thing and it certainly isn’t enduring.”