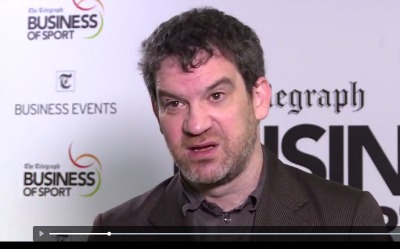 EXCLUSIVE – Brands must respond to the rise of eSports

The man in charge of the famous Football Manager computer game series, Miles Jacobson of Sports Interactive, has warned the sports business world to ignore eSports at their peril.

The rise of professional gamers and eSports globally, has caught many traditional advertisers and brands by surprise. Although Jacobson thinks the industry is now reacting:

“Advertisers are really taking games seriously now, as they realise the amount of eyeballs they can reach… Part of that is through opportunities inside games. So with Football Manager we have advertising hoardings around the side of the pitch, and it’s a key part when we’re looking at getting rights, is letting leagues know how many eyeballs their brands are going to be seen by.  The leagues and the clubs can use that to get their sponsorship deals up, because of the amount of eyeballs.”

“We have separate advertising deals, where the ad hoardings are clickable, so they’re interactive, so people can put special offers on for our audience. It’s a new medium and a new way of doing things.”

Football Manager has also benefitted from the rise of streaming. Computer game players are now broadcasting themselves playing their games – often to huge audiences. The platform Twitch has been key to the rise, and Jacobson says it’s now a huge part of his industry.

“It’s a very important place for games to be. But it’s also a very important place for people who are fans of e-sports. They’ve got all these different channels, completely unrestricted. Anyone can join Twitch and start broadcasting. In Football Manager for example, you press a button and you can be streaming on Twitch. It’s a great promotional tool for the brands, but it’s also creating stars.”

“A lot of the people who are regular Twitch broadcasters are now getting more traditional roles as well, but they want to stay on Twitch. They’re not that interested on being on Sky or BBC because they are doing very well out of broadcasting on Twitch. If you haven’t been there before, and you want to experience people playing games, it’s much much better than it sounds! It’s genuinely entertaining.”

The rise of these stars, through mediums like Twitch, has led to them having audiences which dwarf even the biggest traditional channels, well into the tens of millions. While the rise of the these stars was unexpected, Jacobson says it’s hardly unsurprising.

“It isn’t that unusual if you think about it. If you look at films, it’s not the director or the script writer who is the star, it’s the person playing the character, or the character itself, who’s the star. So it makes sense we are mimicking that industry, but the sports industry as well. It’s not football that’s the star, it’s the footballers. It’s not the chief executives that are the stars, it’s the managers that are the stars.”

“So while I don’t think anyone expected it to happen in the games or sports industry, it’s definitely the way its going. I think it’s fantastic, we’re seeing talent that would not have had a shot with traditional media, just broadcasting themselves from their bedrooms, whether that be on Twitch or YouTube.”

Which leads brands into a somewhat unknown world when they deal with these new stars. The traditional model of advertising doesn’t apply, with the games and gamers able to be more selective with who they work with. But if a brand can get onboard, they get a level of engagement they wouldn’t have experienced before.

“It’s so important for the brands, because for people who play the games, there’s a lot of trust towards the developers and the people doing the videos [on Twitch and YouTube]. So if you are advertising on one of those videos or sponsoring one of those games, you have a better brand fit straight away, because there’s a trust element.”

“Why would this person be doing a deal with this brand if they didn’t like that brand, or didn’t trust that brand. So it is harder to do those deals. There are companies I wouldn’t want advertising in the game, because I may not like their products. So we are able to cherry pick as it doesn’t drive our revenue model entirely.”

“YouTube and the Twitch stars have so many people wanting to work with them, they can also pick and choose.  It’s a very different opportunity to traditional media, you just slap your brand on it, and one that I think is great for the consumer as well as the brands.”

While brands scramble to work with gamers working out their bedrooms, at the other end of the scale, the rise of elite gamers has also become major business as well.

Arenas across the world have started to sell out, and the top players are becoming millionaires.

Major League Gaming has established itself as one of the leaders in that field – their partners Vindicia outlined some of the ways they interact with their audience:

“Major League Gaming has been a client for 4 years, they run gaming tournaments around the world, they’re currently building a stadium in Macau they’re in talks about naming rights for other stadiums for gaming seasons, they’re owners are professional athletes and coaches from the NFL MLB and NBA, the nice thing about eSports is they haven’t given away their rights.”

“The MLG take personalisation very seriously, they have offers that are specific to what you’re interested in based on the data from the website. They’re benefiting from their clients being millennials and teens so they are used to purchasing in this way. As these kids get older, we will have to present them offers in a way that they want to purchase.”

“They’ve gotten very creative with sponsors, they have for example a button in some of their tournaments where you can order a pizza! They’ve been successful with Pepsi, Dominos Pizza bringing them into the model”

For Jacobson the sky is the limit for e-sports. The international e-Sport federation are already in discussions with the IOC about recognition. Should they succeed, a spot at the Olympics at 2024 or 2028 could be a possibility.

“I think eSports is on such a trajectory at the moment it’s neigh-on-impossible to predict where it is going to be in five years. SuperData talks about it being a 1.3 or 1.4 billion dollar industry within three years, I personally think that’s the lowball figure with the way things are going now.”

“We will see a stadium in Europe sell out for an e-sports event in the next two to three years, arenas are selling out all the time. It’s only a matter of time until it becomes recognised as another full sport, rather than an eSport and the way it’s being looked at now.”

“The kids that are playing these games are super talented, and what they can do with their fingers is as good as what footballers can do with their feet. So why shouldn’t they be getting that credit and becoming proper superstars of the future”.

eSports have the power to rip up the rule book, written by traditional sports. Brands, broadcasters, and the wider sports industry needs to sit up and notice the seismic changes going on. Many have already. Jacobson’s message to the sport industry is clear:

“I think people in the sports industry need to take interest, because e-sports is talking to an audience that, at the minute, you’re struggling to get to. If you go to a football stadium or a rugby stadium, the audiences tend to be quite old, compared to when I was growing up, when it was mainly kids.”

“So while you have that captive audience now, in 10 or 20 years time, when people fall out, you might not have new people coming in. So getting involved in eSports and talking to people who love e-sports is going to be great for your brand, and hopefully getting those people back to traditional sports, as well as e-sports.”

Whether it be elite level e-sports, virtual advertising, or the latest Twitch star broadcasting from their room, it’s an industry that only seems to be growing, and bringing onboard more and more partners.