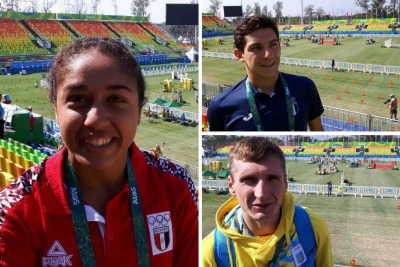 Excitement grows in Rio on eve of Olympic Modern Pentathlon

Modern Pentathletes gathered at Deodoro Stadium today and spoke of their excitement about competing at the Rio 2016 Olympic Games.

The competition begins on Thursday, August 18 with the Fencing Ranking Round at the Youth Arena in Deodoro Olympic Park. The women begin their round robin at 10am and the men at 2.30pm (local time).

Pavlo Tymoshchenko (UKR), the 2015 men’s world champion, said: “The Olympic Games is the greatest competition on Earth and it feels good to be here”

“Everything is beautiful. Today I came here for a course inspection and some swimming training, and then it will be time to rest and prepare for Fencing tomorrow.”

Haydy Morsy (EGY) was another athlete present at Deodoro Stadium as the jumping test was completed under a hot sun.

Morsy (EGY) said: “I am so excited, and also a little bit worried about it, because it’s my first senior Olympics. I competed at the Youth Olympic Games in 2014 but this is my first time with the seniors. I hope to do well.

“I qualified for the Olympic Games in 2015, so it has been a long time waiting for this. It feels amazing to be here in Rio.”

Charles Fernandez (GUA) added: “It feels great to be here: the ambiance, the people, the music… it’s a great experience to be at my first Olympics.

“Now I just can’t wait to get to compete because I’m living the dream, it’s a dream come true. Psychologically, I think I’m fine. I’m not pressuring myself, which is a good sign. I’m here to enjoy it and to do my job.”

In a remarkable coincidence there are three sets of siblings among the 72 athletes who will compete from August 18-20. The USA is represented by sisters Margaux and Isabella Isaksen and Egypt by brothers Amro and Omar Elgeziry. Chloe Esposito and her younger brother Max will compete for Australia, and they spoke about the competition after arriving in Rio from an altitude training camp in Mexico.

Chloe Esposito (AUS) finished 7th on her Olympic debut at London 2012, and she said: “My strengths are swimming and the Combined Event. Usually in competitions, I start the Combined Event placed somewhere in the middle and I manage to catch up a few places. My goal is to finish a few places higher than I did in London.”

Max Esposito (AUS) added: “I don’t want to put too much pressure on myself for the Games, because I’m the youngest athlete. I’m thinking that all the older athletes are here wanting to get a medal and they are putting pressure on themselves. So I’m going to be cool, calm and collected.”

Dr Klaus Schormann, President of the Union Internationale de Pentathlon Moderne (UIPM), paid tribute to the Rio 2016 Organizing Committee and its President, Carlos Nuzman, after completing an inspection of the facilities at Deodoro Olympic Park.

He said: “The facilities that have been established for the Modern Pentathlon are really perfect and the set-up in the stadium is a real highlight of facility design.

“Brazil has a strong culture and heritage of horse sport which has been supportive to our sport for many years, and the horses selected are absolutely on Olympic level for Modern Pentathlon.

“The swimming pool we are using at the Deodoro Aquatics Center is a legacy of the 2007 Pan American Games, as Carlos Nuzman said it would be.

“In fact the philosophy of the Rio 2016 Organizing Committee was to create a new legacy and here at Deodoro there are now facilities for nine sports which will benefit the local community. Everyone involved in Modern Pentathlon can be proud to be part of that new legacy.

“For our sport, the Olympic Games started with a fantastic moment when Yane Marques carried the flag for Brazil at the Opening Ceremony. For the next three days we can promise Brazil and the rest of the world more fantastic moments – and a show that they will never forget.”