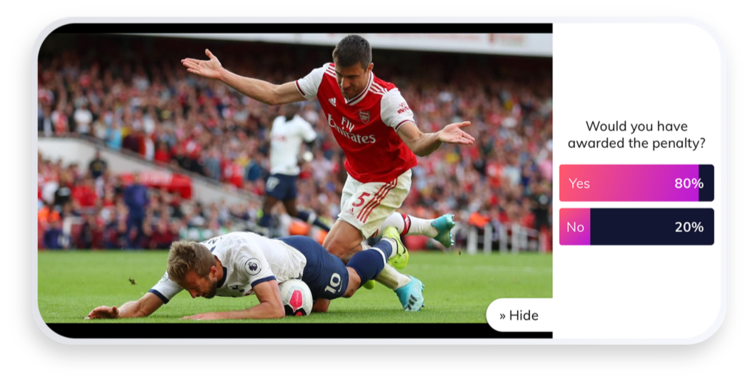 Fans are an opinionated bunch. Whether it’s in the build up, throughout the game, about player decision-making, manager decisions, or post-match arguments about performances. Powering the official Premier League Player of the Month, has shown us how important it is for fans to have their voice heard, with millions of fans now voting each season and feeling like they’re at the heart of the action. We’ve seen this interactive approach increase dwell times by up to 10x.

Integrating that sort of interactivity has always been an exciting proposition to producers and viewers alike. But creative resistance involves concerns about screen clutter and obstructing the action. But in connected environments where personalising your preferences is the norm, do the concerns of the few need to hold back the experience for the many? The success of Snapchat and, later, Instagram Stories, is one indicator of how content creators can engage audiences when flexibility is provided. Overlaying interactivity on video tastefully is proven to improve engagement, and makes proven business models that utilise competitions/sweepstakes, voting and sports betting more effective. No longer will positive ROI depend on the “big interactive hit”, it will become business-as-usual.

“The future of sports is interactive, immersive and intense. As more sports leagues opt for digital broadcast options, the whole idea of what it means to watch a game is going to change.” – David Pierce, Wall Street Journal

What if we could make those options selective, putting the options in the hands – or should we say at the fingertips – of the viewers? A fan who wants to participate can interact with the content, whereas a more traditional ‘lean back’ viewer will have a completely different experience – all from the same screen, and under their own control.

Fans are paying more, and expecting more. We all deserve more and expect sport to evolve itself as part of our ongoing commitment to investing our time and money in it. Brand sponsors are investing in their own content, influencers and fresh ideas to try and achieve cut-through and engagement that converts passive to active, measurable value.

PWC’s 2018 Sports Survey revealed that a massive 34% of fans view the ability to interact with talent as the most desired feature of live streaming. Everything and nothing has changed: we’re still the same people driven by our passions and intrigue.

With the Euros and Olympics just around the corner, taking place in so many locations and in different time zones, the potential to improve the viewer experience, and the associated return for broadcasters, is immense.

Facebook, Instagram, Twitter and Twitch all provide users with ways to interact with live video via commenting, polling and other mechanics. Following the lead set by HQ Trivia, mobile-first gameshows like Quipp in Germany and Austria (powered by Monterosa for ProSiebenSAT1), and many other versions globally have normalised interactivity with video. Our Quipp show is now expanding into sports, launching a football-themed version in collaboration with Kicker.

In another bold move, Sky Sports has opted to publish its much sought-after Premier League highlights content on YouTube, for free. For a subscription business that is one of the UK’s biggest ad spenders, the benefits seem clear – the immense additional reach plus retargeting will fill the funnel with leads and certainly generate more subscriptions. But if audiences are moving to more interactive platforms, are we now admitting that traditional broadcast content isn’t enough for today’s sports fans? Red button and multi-camera content has been around for a generation, but maybe the tech was just too clunky and the audience too fresh to the idea of interactivity when the BBC and Sky first pioneered the approach.

“People remain huge football fans but they want choice in how they consume. Some watch Match of The Day because of the analysis, the longer highlights, commentary and the quality of the studio programming but others are very happy with the shorter highlights available on Sky Sports Football YouTube immediately after the game.

It’s a different kind of consumption.” – Tomos Grace, Head of Sport for EMEA, YouTube (The Drum)

A different kind of consumption, yes, but from the rightsholder/broadcaster’s perspective, why does this have to happen exclusively on a different platform? Where general consumption behaviours must be catered-for on social platforms, broadcasters’ own propositions have the potential to build consumption models suited to their billion-dollar investments in sports.

This trend for interactivity will inevitably continue. Not as a replacement for lean-back consumption, but a new optional mode that will be driven by innovation, tech platforms and audiences themselves. It will put pressure on the so called “traditional broadcasters” of sports and entertainment to keep up. The cost of not allowing viewers to be part of the action will be measured in reduced dwell times, higher subscription churn rates and declining viewer numbers.

We now live in a world of Twitch extensions, of TikTok lip syncing, where millions of people create interactivity on their Instagram stories every day. Viewers, skewing younger, watch a growing portion of their TV on connected devices. We believe the moment has arrived where the problems can be overcome and that a new generation of interactive options will become a fundamental part of every OTT platform, every broadcaster or rightsholder app that includes video.

Fans just want to have fun!

Let’s not forget that creativity and the resulting enjoyment of great content is the biggest driver of trend and adoption. There is a wow factor with interactive video that once you experience it, leaves you wanting more. Giving your opinion on whether a penalty was correctly awarded with hundreds of thousands of other football fans by simply tapping on the livestream on your mobile phone – seeing the result in real time, then hearing the commentators refer to the live results – that’s fun.

Next summer is going to be a fantastic opportunity to excite and engage national audiences as millions of homes become engrossed in UEFA EURO 2020 and the Tokyo 2020. Passionate fans will be supporting their national team and following their heroes, so why not make it the most interactive, fun and enjoyable summer of sport to date?

If you hadn’t guessed by now, we at Monterosa are big believers in the power of interactive video. And our LViS | Interaction Cloud – already used to power mass interaction for premium broadcasters, sports organisations and brands around the world – is the quickest, most powerful and creatively versatile platform on which to build an interactive video strategy. Integrating seamlessly with whichever video solution you are currently using, our technology and track record of success are a potent combination.

If you are as excited by the possibilities of interactivity as we are, drop us an email and let’s get started, we’ve got some very exciting developments to share.