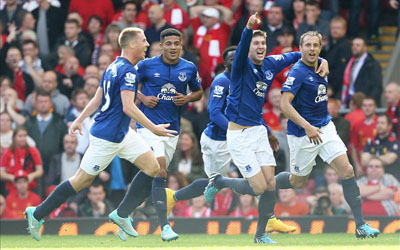 Everton have revealed record profits for the 2013-14 season of more than £28 million.

The profits come off the back of a 39% rise in turnover to £120.5 million, boosted by broadcast revenues of £88.5 million, due to the Barclays Premier League’s new broadcast deal.

The club’s operating gains before player transfers in the financial year ending May 31 were £23 million, an increase on the £7000,000 from the previous campaign.

“It was a special season that blended the optimism of youth, a much talked-about, bold new style, individual brilliance and an enduring team spirit that runs through every Everton squad,” said Everton Chairman Bill Kenwright.

“A season that brought a club record Premier League points haul – a total that in almost any other year, would have sealed Champions’ League football.

“It was a season that, quite simply, we didn’t want to end.”

The club managed to reduce its net debt from £45.3million in 2013 to £28.1million with gate receipts up £1.9million and sponsorship, advertising and merchandising revenue up from £7.6million to £8.4million.

“The strong results for 2013-14 are a reflection of the drive, commitment and hard work of all staff at the club,” said chief executive Robert Elstone.

“Teamwork and clear priorities will always be fundamental to our success. And, at the most senior level in our club, the passion and talent of our outstanding manager fits seamlessly with the vision and dedication of our chairman.

“These combined efforts, shaped by a clear strategy, will continue to be targeted exclusively on ensuring the success of the Everton first team.

“Our financial results highlight growing revenues, costs remaining under control and debt reducing, and when we combine that solid financial base with a playing squad that continues to improve and increase in value, we have every right to be confident and positive on future prospects.”