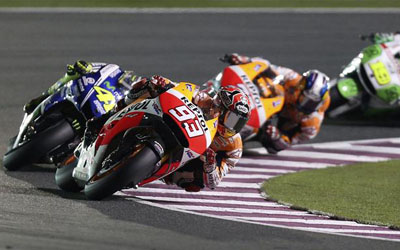 Eurosport have signed a deal with MotoGP rights holder Dorna Sports to be MotoGP broadcaster to German audiences from 2015 to 2018.

The agreement with Eurosport will provide German fans with live coverage in HD for all rounds in all three classes, MotoGP, Moto2 and Moto3, including Friday’s free practice, Saturday’s qualifiers and Sunday’s races.

Eurosport’s commentators and experts will be onsite, and joined at trackside, by an editorial team which will produce a customised feed enhancing the live action with interviews and reports at the Grands Prix each season.

The agreement also encompasses exclusive digital rights in Germany for all races on the Eurosport Player, Eurosport’s dedicated online TV service. Subscribers can access on PC, mobile, tablet and connected TV both Eurosport and Eurosport 2’s live simulcast of the races as well as seven additional live feeds to follow the action from different perspectives. The feeds include coverage from four on-board cameras, one helicopter feed, one live bike tracking feed and one live timing feed.

MotoGP is one of the most popular sporting brands in the German market and attracts strong audiences among the highly sought after male 14-49 age group targeted by advertisers.

The agreement follows the extension of the existing live rights deal signed in April 2014 between Eurosport and Dorna Sports for the broadcast of MotoGP in France for the 2015-2017 seasons.

Manel Arroyo, Dorna Sports Managing Director commented: “We are very pleased that our long term partnership with Eurosport continues to grow and that German fans of MotoGP will be able to enjoy Eurosport’s in-depth live coverage of Grands Prix for the next four years.

“Eurosport’s experience and expertise, coupled with their commitment to produce locally focussed content featuring the German riders in the World Championship will provide fans with engaging and exclusive live content in Germany over the coming seasons.”

Jean-Thierry Augustin, CEO of the Eurosport Group said: “MotoGP is back on Eurosport in Germany, with exclusivity this time around, and we are delighted to offer such a premium property for the coming four years.

“Our partnership with Dorna Sports is a great example of how Eurosport is able to bring fans a complete live viewing experience when it comes to the greatest sporting events. Our coverage is extensive, with the live broadcast of all races each season but we also bring fans added editorial value with an onsite film crew, as well as an immersive and entertaining experience with our multi-feed service. It’s what fans expect today and exactly what Eurosport is capable of delivering.”