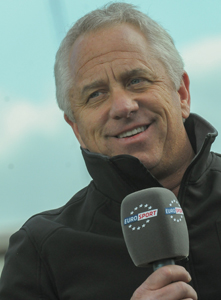 Eurosport have announced that they will celebrate their 25th consecutive Tour de France with a record 350 hours of broadcast.

The hours will be spread over Eurosport and Eurosport 2, impotent with 90 hours coming live and in high definition.

Live action from the Tour will be broadcast on Eurosport, prescription with highlights from the day’s stage appearing on Eurosport 2 at 20:00, doctor with repeats the following morning.

Speaking exclusively to iSportconnect, a Eurosport spokesman said: “The Tour is a key pillar of our broadcast year and so to be able to devote so many hours to such an iconic event demonstrates how we are always aiming to bring fans the most complete and in-depth coverage we can.

“Each Tour has a different style and personality and after the 100th edition celebrations last year, it is very interesting in 2014 to have the Grand Depart in the UK, as well as stages in the Alps and Pyrenees.

“It will be a fascinating race.”

The 2013 edition of the Tour recorded its best audience reach since 2009 on Eurosport and the broadcaster said it was important for them to stay innovative to keep the growing number of cycling fans interested in their coverage.

“Interest in the Tour de France is consistently high and we know that there are a growing number of fans, in the UK especially, who now have a deeper knowledge of the sport than in the past,” added the spokesman.

“It is therefore always important for us to present the event in an entertaining and informative way to meet their expectations and add to their enjoyment of the race.”

One way Eurosport hopes to achieve this is with the addition of three-time Tour de France winner Greg LeMond (pictured) as one of the channel’s pundits for the race.

LeMond will become Eurosport’s cycling consultant 25 years after his legendary victory in 1989 and will provide expert analysis.

Speaking about the Tour starting in the UK, LeMond commented: “I think British cycling is growing so dramatically there. Throughout my career, I’ve always been surprised that England doesn’t have the same passion for cycling as in mainland Europe, but I think it’s flipped; I think that cycling in England is gaining, and cycling in Europe has been waning a little bit.

“I think we’re going to be blown away by the crowds in Leeds, it’s going to be millions. I did it in 1994, we went through the south of England, and there were a million people at the side of the road, it’s exciting.

“I’m looking forward to seeing it.”

Live coverage starts on July 3 with the team presentation in Leeds and from July 5 all stages will be live.